As the start of the season continues to creep closer, it’s time to take stock in our expectations for the coming season. Over the next few weeks, Derek and I will be making a series of bold predictions about the 2013 Yankees’ performance. Some of these predictions may seem a bit far-fetched, but that’s what makes them “bold”. Just to be clear, we’re not saying these things will happen. We’re just saying the odds of them happening are significantly better than most would expect.

To kick things off, I’m going to start with a player that’s been in the news a lot lately: Alex Rodriguez. I boldly predict that he’ll come back healthy from hip surgery and hit at least 13 homeruns this season. 13 homeruns is a very important number for the Yankees. It would put Alex at 660 for his career which would trigger one of the $6 million milestone bonuses in his contract. It would much behoove the Yankees if that were paid out this year rather than in 2014 when they plan to get under the $189 million limit. If he doesn’t get there this season, he probably will next year which would effectively cut the Yankees’ limit to $183 million, as mentioned on River Ave. Blues yesterday.  Here’s why that prediction is so bold…

Warranted or not, A-Rod has received plenty of criticism from fans for his declining performance in recent years. Things really got serious though when the Yankees benched him in the post-season last year. By doing so, they essentially admitted that they thought Raul Ibanez (try to remember regular season Raul) and Eric Chavez had a better chance of helping the team win. No offense to Ibanez or Chavez, but that’s a slap in the face. A-Rod’s stock plummeted further when it was announced that he would need hip surgery that would put him out until July. Brian Cashman even admitted that there was a chance Rodriguez would miss the entire season.

As if that wasn’t enough, news surfaced that A-Rod purchased performance enhancing drugs from 2009-2012. Naturally, this led to speculation that Rodriguez had been juicing all along. Add in the fact that he’ll be 38 in July, and there’s plenty of reason to be unenthusiastic of A-Rod’s 2013. There were even reports that he might retire from baseball altogether due to his injury.

In all likelihood though, he’s not going anywhere anytime soon. So he’ll be given every opportunity to get healthy and re-establish himself. If everything goes well with his rehab, Rodriguez will return to the Yankees after the All-Star Break. The Yankees have 66 games from that point on and Alex will certainly need days off during that stretch. 250 plate appearances is probably an optimistic yet plausible scenario. So 13 bombs over that time would mean A-Rod hits one out in 5.2% of plate appearances. Is that unreasonable? 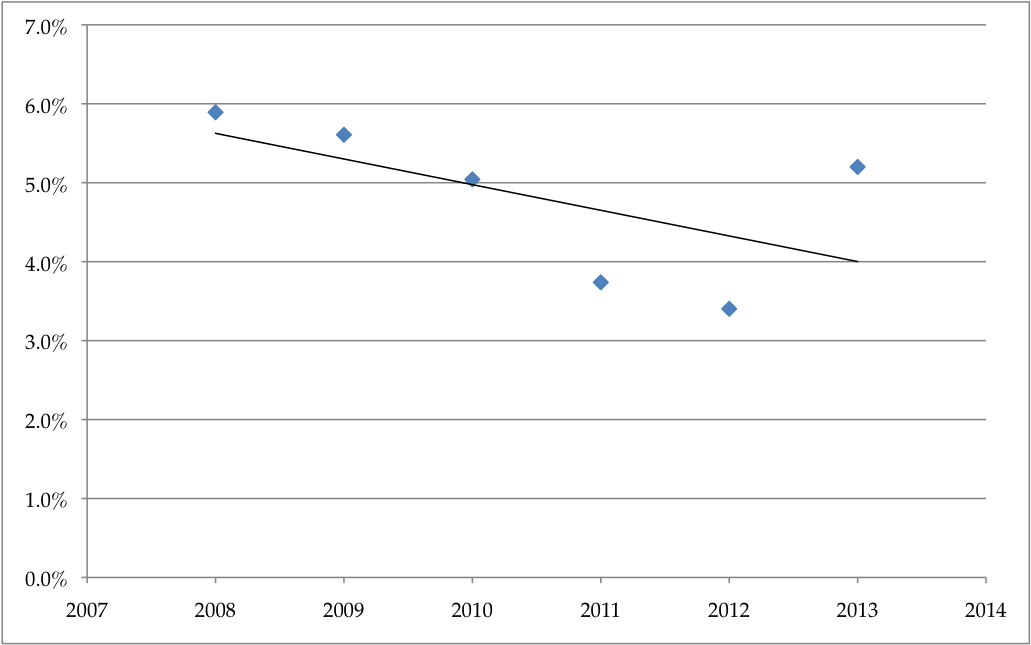 It would certainly be an outlier. But A-Rod’s HR/FB rates have also been well below his career averages the last couple of years which may imply some bad luck. The biggest x-factor here is health though. It’s important to remember that the A-Rod we’ve seen in recent years has often been functioning at less than full capacity. Rodriguez’s hip certainly hindered his performance to some extent last year and I’m sure his broken hand didn’t help either. He was consistently banged up in 2010/2011 as well according to his Baseball Prospectus‘ Injury History. Prior to that, he was dealing with his other hip. A-Rod has (at least had) physical tools that come around maybe once in a generation. If he can somehow be 100% healthy upon returning, he could feasibly be an all-star caliber player again. Obviously, that’s a big “if”. But perhaps the months of rest could do the trick? It’s a bit of a stretch, but Brian Cashman sure hopes A-Rod has 13 homers in him this year. Getting the payroll down to $189M while paying A-Rod’s guarenteed $28M and remaining competitive will be enough of a challenge. That extra $6M could be very crucial considering the holes the Yankees will need to fill next winter.

Chris works in economic development by day, but spends most of his nights thinking about baseball. He writes for Pinstripe Pundits, and is an occasional user of the twitter machine: @_chris_mitchell
View all posts by Chris →
This entry was posted in Analysis, Austerity Budget, Predictions and tagged Alex Rodriguez. Bookmark the permalink.