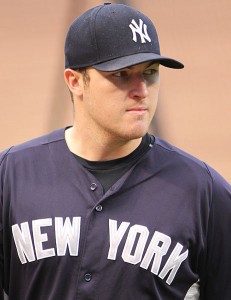 There have been two distinct sides of Phil Hughes this season. The good: a four start stretch of dominance across mid-April and early May, along with last night’s performance against Baltimore. The bad: his first two starts of the year and the previous two before last night. Can his volatility simply be chalked up to his inconsistent career, or is it correctable? Even if an issue is found, can it be resolved?

When Hughes appeared to be turning the corner, I wrote about how his slider had become a difference maker. The pitch has been dominant, against which batters have posted a paltry 18 wRC+. However, his slider can be thrown out the window when his heater is leaking over the middle of the plate, and it’s become impossible to predict which starts he’ll be able to locate his fastball, and those in which he he’ll be unable to. It’s too straight of an offering for it not to be precise. Heck, sometimes when it’s located well it gets pounded. Both of Chris Dickerson‘s homers looked to be on the corners last night. (video: first and second homer). Fastball command is essential for just about any pitcher, but when Hughes’ can’t get a feel for it, he doesn’t get lucky in the way that a guy with a lot of movement can.

In talking with the media before last night’s game, Hughes thinks he may have figured out a mechanical issue with his release point of the fastball (via Chad Jennings):

“I felt like I was maybe on the side of the ball a little bit, which tends (to cause) my fastball to come back over the middle of the plate,” Hughes said. “My bullpen, I tried to focus on staying behind the baseball and continue to stay aggressive. It wasn’t any drastic changes or anything.”

In pitching terms, getting behind the baseball essentially means better squaring up the release point. Think of it as back of the hand directly facing the centerfield wall at the point of release. Any slight release at the side will cause the ball to leak one way or the other, which Hughes is claiming to be the issue.

To confirm this, I took a look at some PITCHf/x data on Texas Leaguers, comparing Hughes great four starts between April 18th and May 4th, his two recent bad ones on May 10th and 15th, and last night’s outing. First, a fastball release point comparison:

It’s pretty obvious that his arm slot has been all over the place, but it looks like he got on top of the ball a little bit more last night. It’s also evident that his release point took a dip during his two recent poor performances. Generally, a drop in arm slot like that can increase fastball movement, which is fine for some pitchers. However, Hughes’ loses his ability to pinpoint his pitches at that slot. Now the question is: how much did his different release point affect his fastball movement?

From this GIF, a cause and effect relationship is confirmed. With the lower release point and not getting behind the ball, Hughes is generating more movement to the left from the catcher’s perspective. In the first and third frames of the GIF (his hot streak and last night vs. Baltimore), the movement to the left is to a lesser degree thanks to his higher release. This certainly explains why some of fastballs targeted in on lefties or away from righties leak out to the heart of the plate.

The results between these two periods are night and day as well. In the 4/18-5/4 period, Hughes generated whiffs 10.9% of the time. In his duds vs. Kansas City and Seattle, swing and misses dropped to 3.2%. Last night, his whiff rate was boosted to 9.7% on the heater. What a difference it appears his arm slot makes.

Is this what’s holding Phil back from being a reliable third starter or better? It very well may be part of the equation, but we can’t know for sure if mastering his release point would be a cure all. Repeatable mechanics are essential for any pitcher, and it appears that when Hughes gets out of whack, things can go downhill in a hurry.

Unfortunately, it just seems we’ll never know which version of Phil is going to take the hill on a night in and night out basis. Much of the negativity directed at Hughes stems from him never living up to his billing as a top prospect, but in reality, he’s been a solid starter. Given his track record, some team is going to be willing to pay him at the end of the year. Plus, at 27 (in June) with a mechanical issue that seems correctable, Hughes still has potential to grow as a pitcher. Maybe this is being too optimistic, but if he can gain some consistency in his release, he could become a steady third starter. Otherwise, he’ll continue to frustrate fans with flashes of dominance and instances of incompetence.

3 Responses to What makes Phil Hughes so inconsistent?