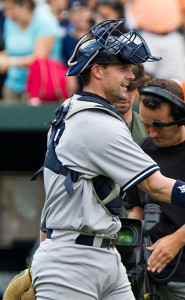 Chris Stewart is terrible, and has no business serving as a Major League starting catcher. Yet, I don’t want to give him too hard of a time, because truthfully, he never deserved this opportunity. Quite frankly, I feel bad for him. It’s obvious that he’s in well over his head, and at this point, burnt out from receiving more playing time than ever in his career.

In the offseason, the Yankees’ seemed confident that they could get by with a tandem of Francisco Cervelli and Stewart after letting Russell Martin walk. However, once Cervelli went down, Stewart was thrust into the full-time role and subsequently exposed. In retrospect, Brian Cashman should have made a mid-season upgrade prior to the trade deadline, such as Carlos Ruiz, but nothing ever came to fruition. I pined for Ruiz back in July, but perhaps the price was too high. Regardless, the front office failed to find a viable solution for the club’s weakest position, while displaying blind confidence in a player who truly was unproven.

Throughout the franchise’s history, the Yankees have had a plethora of All-Star and Hall-of-Fame caliber backstops. Yogi Berra, Bill Dickey, Elston Howard, Thurman Munson, and Jorge Posada have been the franchise gold standard. It goes without saying, but nobody expected Stewart to hit like that group. He wasn’t expected to produce like Martin, either. However, the one expectation that came with Stewart was sound defense. He seemed to have a good rapport with the pitching staff, and was well regarded as a pitch framer. Yet, at one point does one’s defensive-prowess get outweighed by offensive ineptitude?

The three main versions of WAR all peg Stewart right around replacement level, which essentially means his defensive skills are negating his offensive pitfalls. Yet, given his horrific performance at the plate (55 wRC+, .212/.289/.272 in 321 PAs), one would expect it to be next to impossible for the baserunning and defensive WAR components to make up for his offensive shortcomings. The positional adjustment certainly helps (there’s a big boost to catchers, and rightly so), but it’s hard to see his defense being a +4.0 runs in the fWAR computation (which uses UZR). He certainly has failed the eye test.

Most noticeable has been Stewart’s inability to keep the ball in front of him. 11 passed balls make Stewart second-worst in the category behind Toronto’s J.P. Arencibia (in 201 fewer innings!). To be fair, Stewart grades out very well in terms of pitch framing, but unfortunately, that’s very hard to see on a day-to-day basis. And, as the last few weeks have been so intensely scrutinized due to the Wild Card race, his bat and passed balls have been most obvious. Ultimately, while advanced defensive metrics for catchers have yet to be perfected, one thing is for sure: Stewart can’t hit. So unless he was unequivocally brilliant behind the dish (Yadier Molina-esque, for instance), his lamentable bat would have never carried him.

It’s subjective, yes, but given the previous information, I wonder if Stewart’s defensive WAR component is slightly inflated. Moreover, arguably his best skill, pitch framing, isn’t even accounted for in WAR computations. Now, if his WAR is accurate (and all three versions seem to be at a consensus), then maybe the pitch framing boosts his overall value a bit. But again, I find it hard to believe the defensive components (UZR, DRS) have Stewart pegged accurately.

Putting aside personal opinion on Stewart’s defense, just how bad does Stewart’s season compare to catchers of the Yankees’ past? Using Baseball-Reference’s Play Index, we can find out. I qualified the following comparisons including only catchers who played at least 82 games at the position, thereby making them the primary backstop. Per OPS+, since 1908, only Jose Molina‘s 2008 was worse (51 vs. Stewart’s 56). Like Stewart, Molina became the starter after Posada succumbed to injury. Per rWAR, the only qualifying Yankee catching season absolutely worse, since the early 1900s, was Rick Cerrone’s 1982 (-1.2 rWAR). There are other seasons that are +/- .1 or .2 rWAR, but those differences are negligible and subject to margins for error.

As I insinuated in the opening, this is more of a condemnation of the Yankees’ lackluster offseason than of Stewart. Going into 2013 without a catcher who truly deserved a starting role, while letting Martin go on a reasonable contract has reared its ugly head. I think the team may have been able to get away with Stewart buried in a lineup as deep as some of those of recent seasons, but clearly not this one. Yes, this team has been decimated by injuries, but it’s not like they were all unforeseen. Guys like Derek Jeter, Alex Rodriguez, Kevin Youkilis, Mark Teixeira, etc. have all had health concerns in recent years, yet no true safety net was put in place. Without any plausible fallback options at other places around the diamond, a guy with the offensive ability of Stewart is exposed. Plus, with more time behind the dish than any other season in his career, Stewart was destined for failure by no fault of his own.

This entry was posted in Analysis and tagged Chris Stewart. Bookmark the permalink.

5 Responses to Chris Stewart has been historically bad, but at the fault of others