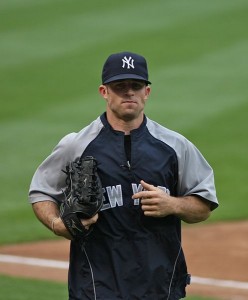 It’s no secret that the Yankees might get involved with a number of free agents this winter. Yet, with a $189M budget “goal”, might the trade market be a more efficient endeavor? Unfortunaley, with a farm system that took a step back in 2013, it might be hard to make a significant improvement via trade. The only players with good trade value, outside of Gary Sanchez, might be on the Major League roster. Aside from Ivan Nova and perhaps David Robertson, Brett Gardner might be the most valuable trade asset on the Yankees. Should the Yankees consider dealing Gardner?

There are a few reasons why it might make sense for the Yankees to part ways with their centerfielder now. The main reason is his long-term outlook. He’ll be a free agent after 2014, and I wouldn’t expect the Yankees to retain him thereafter. He’s already 30 at this point, has had some injury issues, and his game is predicated on speed. Speed doesn’t age well, so once he loses a step or two, his value will diminish significantly. That means his two calling cards, speed on the bases and outfield defense, aren’t likely to get any better. Yet, Gardner’s short-term prospects are attractive enough that a few contenders would certainly inquire if he was made available.

Gardner should be pretty cheap in 2014 (Matt Swartz’ estimates $4M in arbitration), plays a good centerfield, and gets on base. In his first full season as the Yankees’ centerfielder, he hit .273/.344/.416 (108 wRC+) in 609 plate appearances, good for 3.2 fWAR. His WAR totals have been higher in the past, but some of that might be due to his defensive WAR components being higher in left compared to center. Either way, his range is better than that of nearly all Major League centerfielders, which is where he derives most of his value.

The other key component of Brett’s skillset is his ability to get on base. He’s not great swinging the bat, but his 2013 8.5% walk rate was above league average. His career walk rate is 10.3%, which could understandably make his drop in 2013 cause concern. This wasn’t a vision issue, however. He was more aggressive at the plate, swinging at 5% pitches than his lifetime norm. Even if he maintains a walk rate that is slightly above average, his speed bolsters his case to be a leadoff hitter in any lineup.

Gardner’s ability and status bring two teams to mind as suitors: the Cardinals and Reds. Perhaps St. Louis wishes to upgrade over Jon Jay? There’s likely to be an outfield void regardless with Carlos Beltran a free agent, but they have an internal solution in prospect Oscar Taveras. As a plus, who wouldn’t want to make a deal with an organization as lush with talent as the Cardinals. Cincinnati is in a similar situation, with Shin-Soo Choo expected to depart via free agency. They could plug Billy Hamilton into center as a replacement, but his bat is a big question mark. That’s where Gardner enters play for the Reds.

A couple reasons have been established for the Yankees to test the trade waters, and there’s no doubt Gardner would be attractive to other clubs. However, how exactly would the Yankees go about replacing Gardner? There’s nobody internal ready to step up. Curtis Granderson may be difficult to retain. One thing’s for sure: Vernon Wells, Ichiro Suzuki, and Alfonso Soriano won’t cut it as a trio next year. Unless there is a plausible plan B, there’s no way the Yankees can afford to trade Gardner. If there was no contingency, any offer for Gardner would have to unequivocally be in the Yankees’ favor to complete.

Trading Gardner seems like a novel idea, but in reality, it would just create a new hole in a team already full of them. I’d expect the Yankees to listen on any offers for Gardner, simply out of due diligence, but it would be difficult to subtract roughly three wins from a position that would be difficult to find a new answer for. It would be nice to get something for Gardner before he’s lost for nothing, but in all likelihood, keeping him would be in the 2014 Yankees best interest.

Photo by User Keith Allison on Flickr (Originally posted to Flickr as “001B4375”) [CC-BY-SA-2.0 (http://creativecommons.org/licenses/by-sa/2.0)], via Wikimedia Commons