It’s obviously very early in the offseason and the Yankees still have a lot of work to do, but it makes sense to take inventory of what they currently have on their roster. Player projection systems are an objective way to do just that. There are a few projection systems out there that attempt to forecast players’ performances based on past statistics – ZiPS and PECOTA are the most well-known.  Most of these projection systems don’t come out until later in the offseason, but the beta version for the Steamer projections is already up on Fangraphs. These projections are far from perfect but, at the very least, they give us something to talk about over the winter.

The projections say that current roster has nowhere near enough talent to be competitive, which shouldn’t be news to anyone. The Yankees weren’t particularly good last year and have since shed some key players in Curtis Granderson, Hiroki Kuroda, Andy Pettitte, Mariano Rivera, and of course Robinson Cano. The players currently on the roster are only projected to be able to muster about 70 wins.

Here’s how the 2014 Yankees project individually: 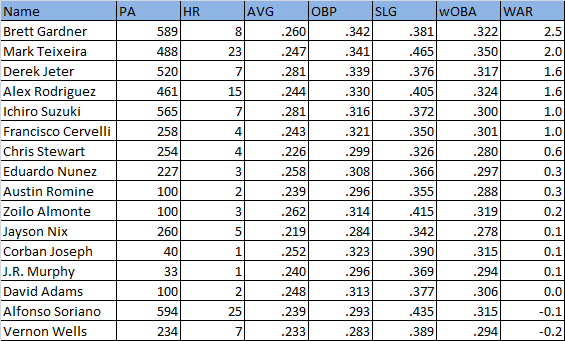 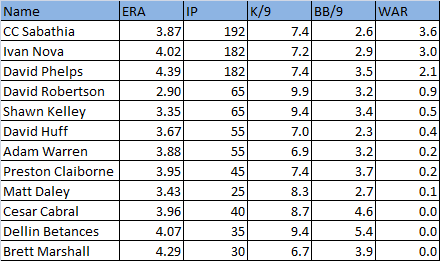 It’s worth noting that the plate appearance and innings totals listed above don’t add up to a full season’s worth of playing time. If the Yankees were to roll with this squad for some reason, they’d presumably shift more playing time to some of the replacement level-ish guys on the list like David Adams and Brett Marshall. Players even farther on the fringe– the Antoan Richardson‘s and Vidal Nuno‘s of the world would likely be in the mix as well.

A few things that stand out to me about these projections:

Jeter and Ichiro are not done

Zoilo Almonte will be better than Alfonso Soriano

Steamer is pretty high on Zoilo Almonte in 2014, projecting him for a 98 wRC+. A good defensive corner outfielder with league-average has some value – about a win or two over a full season. Alfonso Soriano’s projection, on the other hand, is kind of depressing. Steamer pegs him as being slightly below replacement level. Other than hitting 25 home runs, he’s not expected to do much else. But hey, at least he’s better than Vernon Wells.

David Phelps will be a reliable starter

David Phelps’ projection is pretty encouraging. Steamer thinks he can string together a full season of 4ish ERA and accumulate 2.1 WAR, which would be more than acceptable for the Yankees’ fifth starter. In fact, that would be acceptable for a #3 starter – he’s projected to be the 70th best pitcher in baseball in 2014. The Yankees have jerked Phelps around a bit over the last couple of years, but he’s been decent in his sporadic starts in pinstripes. A spot in the Yankees’ rotation will be his to lose in 2014, so this could be his chance to show that he’s more than just a swing-man.

David Huff will be a reliable bullpen arm

David Huff’s projection also looks promising, especially with the probable departure of Boone Logan. That’s not to say the Yankees shouldn’t try to bring in another lefty, but Huff’s handedness and versatility could definitely be useful as some combination of a loogy, long reliever, and spot starter. Huff was very good as a starter in Triple-A Scranton last season, so it’s not like this projection comes out of nowhere.

As constituted, this team is projected to win about 70 games — 68 if you exclude Alex Rodriguez. That puts them about 20-25 wins (roughly four Robinson Cano’s) short of being a playoff team. Obviously, the Yankees will be very active this offseason, but that’s still a lot of ground to cover. Re-signing Cano, who’s projected to be worth 5.7 WAR, would certainly  help.  But to be competitive, the still going to need to bring in some quality starting pitching and find some sort of help at catcher, in the outfield, on the left side of the infield, and probably in the bullpen too.

Chris works in economic development by day, but spends most of his nights thinking about baseball. He writes for Pinstripe Pundits, and is an occasional user of the twitter machine: @_chris_mitchell
View all posts by Chris →
This entry was posted in Analysis, Speculation. Bookmark the permalink.