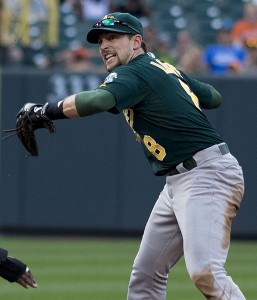 In the early stages of the offseason, the Yankees have been linked to a few infielders. Some of these rumors pertain to a contingency plan for the loss of Robinson Cano, while others relate to resolving the concerns on the left side of the infield. On Tuesday, Ken Rosenthal noted one player who might be available, and right up the Yankees’ alley: Jed Lowrie. Rosenthal’s tweet does indicate that it is speculation, and that his sources have shot down the notion that the Athletics’ shortstop is available. Nonetheless, with expectations understandably low for Alex Rodriguez and Derek Jeter (each for different reasons), Lowrie is certainly worth an inquiry to Billy Beane.

Lowrie, 30 in April, is just the type of player the Yankees need as insurance for Alex Rodriguez and Derek Jeter. Last season, the lack of depth at shortstop and third base was detrimental. We’re all sick of Eduardo Nunez, right? The Yankees can’t afford to have Nunez received 300 plate appearances again, nor waiver wire pickups like Alberto Gonzalez and Reid Brignac get significant run. Yet, the Yankees are going to need major help from role players at the hot corner and shortstop with the suspension decision looming for Rodriguez, and Joe Girardi needing to manage Jeter’s health with extra time off or as designated hitter.

Some of Lowrie’s cons include his defense and health. I already touched upon his defense in the previous paragraph, and depending on what metric is used, Lowrie grades out to slightly below average (UZR) to bad (DRS). This is really just at short, however, as the samples at second and third base are simply too small to make a conclusion. The other area of concern with Lowrie is his injury history. In 2013 it was not an issue, as Lowrie played 154 games, his first full season of his career. Despite his clean bill of health this year, there’s no hiding his lengthy injury history. Hopefully, he’s put that worry to bed with his previous year, but there must be concern that it might crop up again.

Why would Billy Beane entertain offers for his starting shortstop? Lowrie is coming off a career season and a major contributor to his team’s division title, amassing 3.6 fWAR. In addition, as Rosenthal tweeted, he is bridging the gap until prospect Addison Russell is ready. On the other hand, now could be an optimal selling point for the A’s. With Lowrie entering last season of control, Oakland might want to try to get something in exchange before Lowrie becomes a free agent. Plus, with his salary expected to double ($4.8M arbitration estimate), a trade might be wise considering Lowrie’s past health issues and the franchise’s budget. The Yankees could certainly take on that kind of money, and are probably willing to take a chance on Lowrie’s body given his caliber of play.

Trading Lowrie now would undoubtedly be buying high for the Yankees, but that doesn’t mean his cost would be exorbitant. He’s essentially a rental, which means that any deal for Lowrie won’t be a back-breaker for the acquiring team especially considering that he isn’t an elite player. That might work out well for the Yankees, considering that they don’t have much in terms of top prospects anyway.

Unfortunately, if Lowrie’s availability is real, the Yankees won’t be the only team interested in his services. St. Louis, for instance, is seeking an upgrade at shortstop. Considering the state of the Yankees’ farm system, Oakland would probably prefer to deal with the lush Cardinals organization if push came to shove. That doesn’t mean he’s not worth pursuing, of course. Lowrie is an ideal fit for the Yankees, and would represent a major upgrade for the infield.

(This was originally published on Pinstripe Alley)