It’s probably safe to say that Robinson Cano is a significantly better player than Jacoby Ellsbury. Yet, Ellsbury’s 7 year, $153M contract didn’t fall too far short of the 7/$175M pact the Yankees were reportedly offering Robinson Cano. It’s no shock that the Yankees wouldn’t match the Mariners’ $240M offer, but it is a bit surprising that they seemed unwilling to come any closer than they did, especially considering the generous contracts they handed out to Ellsbury and Carlos Beltran. Based on the contracts offered, the Yankees seem to think Ellsbury and Cano will yield similar value over the next seven years — an ideology that doesn’t jive with popular opinion. So why might the Yankees feel Ellsbury would be a better bet than Cano? Here are some possible explanations.

While Cano is easily the better player, the size of the gap between them is not entirely clear. The discrepancy between two players’ values differs depending on which brand of WAR you’re looking at, mostly due to differences in the way defense is measured. 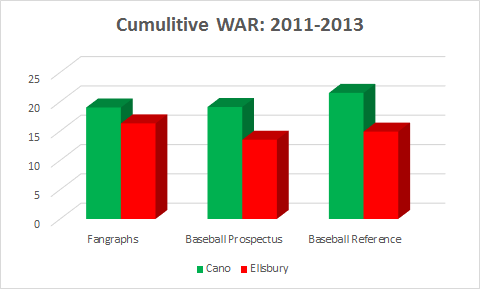 The Yankees almost certainly have their own method for calculating a player’s value, so my guess is their internal valuations resemble the WAR totals from Fangraphs moreso than those from Baseball Prospectus and Baseball Reference.

Although Cano is the better player today, who knows if that will still be the case seven, or even two, years from now. Baseball people have long been skeptical of speedy outfielders (like Ellsbury) and second basemen (like Cano) remaining productive into their 30’s. For players like Ellsbury, conventional wisdom holds that since much of his value is tied to his speed — in the outfield and on the basepaths — his production will crater as soon as he begins to slow down. Second basemen are widely believed to fall off a cliff as well. The most cited explanation here is that take-out slides from runners trying to break up double plays takes its toll over the years.

With these two players in mind, Dave Cameron of Fangraphs crunched the numbers on both second basemen and speedy outfielders and found that these sudden, early declines are mostly myth — at least for players as good as Ellsbury and Cano.

Still, there have been plenty of very good second baseman in recent years who have suddenly collapsed at a young age — Edgardo Alfonzo, Roberto Alomar, Carlos Beaerga, Brett Boone, Marcus Giles, and Chuck Knoblauch to name a few — so maybe the Yankees think these players’ demises have some predictive value that applies to Cano.

In addition to being very good hitters, both Ellsbury and Cano are plus defenders at premium defensive positions. But five or six years from now, that may no longer be the case. Once Ellsbury starts to lose some of his speed, he could easily shift to one of the corner outfield spots — like Curtis Granderson did in 2013 — but Cano’s, long-term landing spot isn’t as obvious. If and when Cano can no longer man second base, his next stop would probably be designated hitter (or maybe first base). Given the Yankees’ affinity for signing veterans to long-term deals, I would imagine they’ll have no shortage of DH options by that point. So, while Cano might still have some value as a DH in his late thirties, it could be a challenge for the Yankees to make use of him in that role.

The Yankees have had Robinson Cano in their system since he was an 18-year-old back in 2001. In theory, this means they know him better than anybody. Information asymmetry is a thing in baseball, so perhaps there’s something about Cano’s makeup that the Yankees don’t particularly like.

Much has been made of Robbie’s reluctance to bust it down the line on routine outs. There are also reports coming out now that Cano didn’t always see eye to eye with his manager, Joe Girardi. Silly things like these don’t even come close to justifying letting a franchise centerpiece walk away, but maybe they’re an indication of a deeper problem. This is speculation in it’s purest form, but maybe something that we don’t know about caused the Yankees to shave a few million from their offer.

This was originally written for Pinstripe Alley

Chris works in economic development by day, but spends most of his nights thinking about baseball. He writes for Pinstripe Pundits, and is an occasional user of the twitter machine: @_chris_mitchell
View all posts by Chris →
This entry was posted in Analysis, Trade Talk, Transactions and tagged Jacoby Ellsbury, Robinson Cano. Bookmark the permalink.