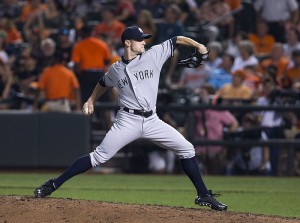 Prior to reaching free agency, the Yankees have had a knack of locking up their home grown talent. Derek Jeter, Mariano Rivera, Robinson Cano, and most recently Brett Gardner all signed extensions during their arbitration years. Next in line might be David Robertson. 2014 is the final season he will be under team control, meaning he’ll be a free agent after the year. Robertson and the Yankees avoided arbitration this year for $5.2M, but could work on something that keeps him 2015 and beyond. There doesn’t appear to be much traction yet, but what might be a fair price for the new closer?

Each season after 2014, I assumed a yearly 10% decline in innings pitched. For WAR, I prorated the prior season’s WAR total to the following season’s innings projection, and then shaved off 10%. This isn’t a particularly nuanced estimate, but a way to get a general idea of how the future of Robertson’s career might shake out.

The next step is to figure out the price per WAR for relievers on the open market. Since the Yankees won’t be signing away any of Robertson’s years of control, they’ll likely have to pay around market rate even if they extend him today. I took the past three winters reliever signings (note: Major-League contracts only, excluding LOOGYs), average annual salary, and average projected WAR for 2014 to come up with the average cost per WAR (chronologically weighted 60-30-10). Adding in a conservative 5% inflation for 2015, I reached $14.4M per WAR for relievers. If this seems high, that’s because it is. Compared to other positions, relievers receive the most per WAR in free agency.

Using Robertson’s WAR forecast and 2015’s $14.4M per WAR inflating 5% yearly, we get almost $35M for three seasons and about $42M for four. This is a good chunk of money, but a far cry from reliever contracts in seasons past, most notably Jonathan Papelbon‘s four year, $50M pact with Philadelphia.

I must concede that estimating a contract based on such small WAR totals has its flaws considering the undisclosed error bar the stat has. Yet, it seems like my calculation spit out a couple of contracts that are reasonable at first glance.

Now the question is: should the Yankees make either of these deals if the opportunity presents itself? The three-year deal would be preferable to limit risk, obviously. However, the four-year contract isn’t outrageous either. The Yankees do have some intriguing arms in the system on the rise, such as Dellin Betances and Mark Montgomery, but the bullpen sure looks barren without Robertson in the fold after the season. I’d expect the Yankees to eventually reach an accord with Robertson, but it seems logical for D-Rob to wait until the end of the year in order to field an array of bids.

This entry was posted in Analysis and tagged David Robertson. Bookmark the permalink.