Two years ago, the Yankees used their second round draft pick on Austin Aune, a high school shortstop from Argyle, Texas. That decision isn’t looking like a good one so far. Over 328 plate appearances in rookie ball, Aune’s hit just .231/.294/.332, including a downright dismal .192/.230/.263 showing last year where he struck out a whopping 43.6% of the time — over twice the league average of 20.4%. Aune was all sorts of terrible last season, but at the same time, he was only 19 years old, and we’re only dealing with 165 plate appearances. Should two and a half bad months be enough to give up on what was a fairly high-end prospect?

Luckily, we have years of draft data and minor league stats to help answer that question. Most alarming about Aune’s 2013 was his 44% strikeout rate, which was a  26 percentage points above the 2013 Gulf Coast League average. Over the past two decades, there have been 37 seasons in rookie ball (minimum 150 PA’s) where a player has posted a strikeout rate at least 20 percentage points above their league’s average. Only one of those players — Casper Wells — ever cracked the big leagues. And unlike Aune, Wells at least managed an above-average walk rate despite striking out 22% more often than the league. In fact, no player with strikeout and walk numbers remotely close to Aune’s has ever made it to the bigs: 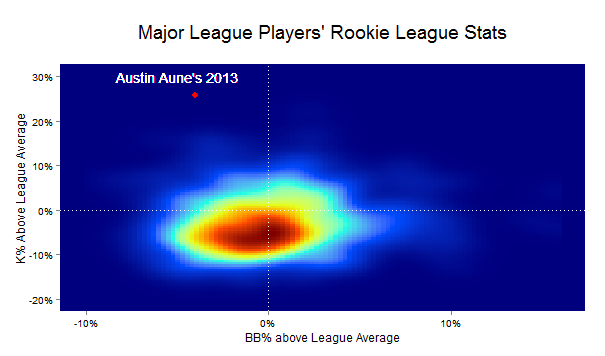 As if that wasn’t enough, Aune’s also been moved from shortstop to right field since draft day. I have no idea what type of an outfielder Aune is, but in general, corner outfielders provide much less defensive value than shortstops. Clearly, this all doesn’t bode well Aune. No player has ever bounced back from a stat line as poor as his 2013 campaign, and now that he’s no longer a shortstop, his odds are even longer. Aune’s less than two years removed from being picked in the second round, but his future as a professional baseball player looks extremely dim.

Chris works in economic development by day, but spends most of his nights thinking about baseball. He writes for Pinstripe Pundits, and is an occasional user of the twitter machine: @_chris_mitchell
View all posts by Chris →
This entry was posted in Analysis, Prospects and tagged Austin Aune. Bookmark the permalink.