After missing two months with a pinched nerve in his back, shortstop Brendan Ryan is finally healthy and ready to start his 2014 season. With Derek Jeter currently manning short, it’s not entirely clear how much Ryan will play upon his return to the lineup. But given Jeter’s recent play at shortstop, the Yankees would be wise to hand the reigns over to Ryan more often than not.

Now, “Jeter’s recent play at shortstop” could easily refer to his entire body of work at the position, but his defense has been especially bad as of late. Everyone knows that Jeter’s range is atrocious, but he’s not even fielding all of the balls hit right at him anymore — previously his one redeeming quality on defense. In addition to the all those balls he couldn’t quite get to, the cap’n has already made three errors so far this season. Jeter’s porous defense is especially troublesome given the Yankees’ grounder-oriented pitching staff — Hiroki Kuroda, Masahiro Tanaka, and CC Sabathia all have ground ball rates in the 50% range.

Jeter may be toast defensively, but he’s going to remain in the lineup in some capacity, because, well he’s Derek Jeter. Besides, despite his .304 wOBA, it’s probably a safe bet that he has at least a few hits left in his bat. But at this point, it probably makes sense to play Jeter at designated hitter more often than not. Of course, the DH spot is already occupied by outfielder Alfonso Soriano — and the outfield filled with Jacoby Ellsbury, Brett Gardner, and Carlos Beltran — so a move to DH for Jeter would mean a reduction in playing time for at least one of those players.

The obvious weak link of this quartet of outfielders is Soriano. The 38-year-old can still hit his share of homers, but currently holds a paltry .272 OBP, and lacks the speed and arm to be an asset in the outfield. Like Soriano, Beltran’s also a liability in the field who has struggled to get on base this season, posting a .291 OBP so far. But what differentiates these two is their platoon splits. Platoon stats can be dicey in small sample sizes, but both hitters have exhibited striking splits recently. Soriano has punished left-handed pitching in the last couple of years (147 wRC+), while the switch-hitting Beltran has done the same to righties (142 wRC+).  This makes them ideal candidates for a platoon in right field, where each would only be in the lineup when he has the best chance of offensive success. 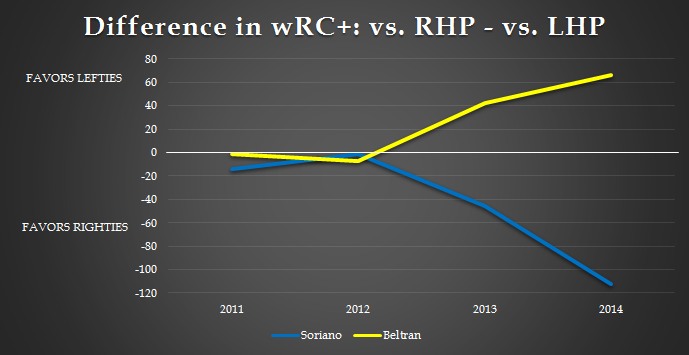 Odds are, its only a matter of time until this situation will works itself out. An injury to any one of Soriano, Beltran, Ellsbury, Gardner, Jeter, or Ryan would eliminate this log-jam, allowing all healthy parties to resume playing everyday. But for now, continuing to play Jeter at shortstop is unacceptable, and the Yankees should take whatever steps are necessary to keep him off of the field — even if it means benching one of their bigger power threats to do so.

Chris works in economic development by day, but spends most of his nights thinking about baseball. He writes for Pinstripe Pundits, and is an occasional user of the twitter machine: @_chris_mitchell
View all posts by Chris →
This entry was posted in Analysis and tagged Alfonso Soriano, Brendan Ryan, Carlos Beltran, Derek Jeter. Bookmark the permalink.