While analysing various players over the past few weeks, I began to notice a trend. It seemed like almost every recently acquired player we analyzed was performing better than their past performances would suggest (Eppley, Ibanez, Chavez, Kuroda). There are many possible explanations for this occurance. It could be due to superior scouting, good coaching, or even simply being lucky. I was curious to see if there was something to this or if this was just an example of selection bias. Perhaps we were writing about these players because they had experienced breakouts and their successes don’t necessarily prove the greatness of Brian Cashman and the Yankees staff.

The players in green have significantly exceeded expectations while the players in red have either fell short of them or been injured all season. Based on this list, it looks like the Yankees would have an excellent track record if not for the injuries. The only healthy player who has really disappointed has been part-timer Andruw Jones this season and he hasn’t even been that terrible. Now let’s look at the freely available talent acquired by the Yankees. This includes minor league deals, players claimed off waivers, and players acquired for essentially nothing in return. Each year, there are dozens players claimed off waivers and signed to minor-league deals. Since these players generally don’t get paid significantly until they’re activated, this list only represents those who played for the Yankees. 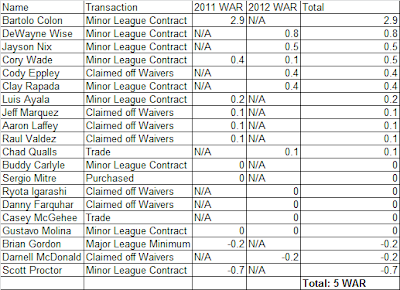 Over the past 2 seasons, the Yankees have found 5 WAR on the scrap heap. That number would be 5.7 if we were to discount the garbage innings given to the remains of Scott Proctor last September. Bartolo Colon heads the list with his 2.9 WAR last year. Obviously, 5-6 wins over 2 years aren’t a huge deal, but they certainly help the cause. As a frame of reference, this is comparable to what Derek Jeter has provided over the last 2 seasons. The Yankees seem to have done a good job of snatching up unwanted players and turning them into solid contributors. This holds especially true in the bullpen. Eppley, Rapada, Wade and Ayala provided decent options in the middle innings and were all used in high leverage situations at one time or another.

So why have so many of the players acquired by the Yankees done better than expected? The easy thing to say is that it’s some combination of scouting, decision making, and coaching. While this very well could be the case, simply citing reasons would be a classic case of confirmation bias. We are dealing with a small sample and it’s certainly possible the Yankees have just gotten lucky on a few players. However, there seems to be at least some trend to these acquisitions. They rolled the dice on several once great players whose stars had significantly diminished. Guys like Colon and Chavez were all but out of baseball when the Yankees brought them on board. Freddy Garcia and Andruw Jones seemed to be in the twilight of their careers as well. However, all of these guys proved that they still had something left in the tank. Prior to the 2011 season, Yankees Assistant GM Billy Eppler said:

“One thing to remember is that all of these players were stars. If you are going to do a reclamation project then do it with these types of players because if there is still something there and it comes out, you are getting all or a big part of a star. What do you get with a reclamation project of an average player?”

That strategy has certainly worked out well for the Yankees as of late as its supplied them with some productive role players at a minimal cost. Its hard to say for certain weather or not the Yankees have developed an edge in acquiring players, but they have certainly done well with their recent acquisitions. If nothing else, their strategy of investing in low-risk, high-reward reclamation projects seems to be working for now at least.

Chris works in economic development by day, but spends most of his nights thinking about baseball. He writes for Pinstripe Pundits, and is an occasional user of the twitter machine: @_chris_mitchell
View all posts by Chris →
This entry was posted in Analysis, Transactions and tagged Brian Cashman. Bookmark the permalink.