Thanks to a calf strain, the Yankees will have to do without Mark Teixeira for at least a week, probably more. Coupled with A-Rod’s absence, the team’s offense will almost certainly have trouble scoring runs for the time being. Teixeira’s certainly been a contributor this season as he’s posted a .346 wOBA and a 116 wRC+. However, he’s not the offensive force he was in years past. In fact, his numbers have been on the decline ever since he joined the Yankees.

In 2008, Teixeira was one of the premier hitters in the game as he put up a robust .410 wOBA. His 47.2 batting runs ranked 5th in the majors. The following offseason, he signed with the Yankees and his offensive line has gotten progressively worse ever since. Here’s a graph of his wOBA over the past few seasons: 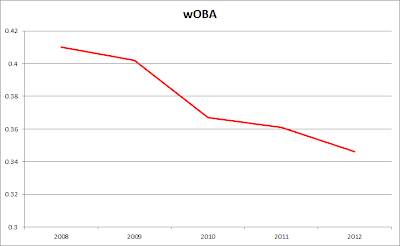 It should be noted that offensive production as a whole has seen a downturn during this period which offsets some of his decline. Nonetheless, his wRC+’s (which are scaled to league average) have also been on a steady decline which indicates Teix’s offensive output is decaying at a higher rate than the league average.
Let’s delve a little deeper to try and determine exactly what parts of his game have eroded since 2008. I’ll steal Jack Moore’s ideology of looking at the “Four Factors” of hitting. To account for the changing offensive environment, I will compare his numbers to league averages.

His K% hasn’t really changed too much relative to league averages and while his ISO appears to be trending down slightly, it’s also been very inconsistent from year to year. However, his BB% and BABIP have clearly been on the decline. 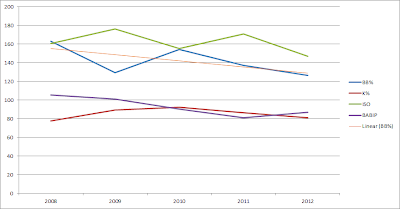 Teixeira’s drop in BB% can be explained by eroding plate discipline. His outside-swing percentage has been steadily increasing since 2008. His newfound propensity to swing at pitches out of the zone might also help to explain his drop in BABIP. Hitting pitches out of the zone undoubtedly leads to weaker contact which gives the fielders a better chance to convert them into outs.

Another factor that may be contributing to Teixeira’s drop in BABIP is his increased fly ball rate. Generally speaking, fly balls fall for hits less often than line drives or grounders. Tom Verducci speculated a drop in bat speed coupled with his swing mechanics may contrbute to more fly balls.

This article by Josh Weinstock interestingly points out that he’s experienced a drop in BABIP for pitches on the outside of the plate while batting left handed. It’s difficult to pinpoint what might be causing this change; but, perhaps something in either his swing or approach has changed.

Yet another possibility is that teams have employed infield shifts more frequently and/or effectively in order to combat Teixeira’s pull-happy tendencies. Teixeira actually attempted to alter his approach this year in order to beat the shift more often. However, it ended up doing more harm than good in the end and he eventually reverted back to his old approach.

We can’t be certain if everything mentioned has played a part in Teixeira’s recent performance. However, it’s clear that his offensive game is on the decline. Given that he’s on the wrong side of 30, it’s hard to envision him reversing that trend. However, his peak was high enough that he’s still a well above average hitter even after withstanding a drop in production for 4 consecutive years. Not to mention that he’s also still an excellent defender by all accounts. Teixeira may no longer be an elite 1B, but he’s still a valuable part of the Bomber’s lineup. Given the Yankees offensive performance of late (68 wRC+ over last 7 days), he can’t return soon enough.

Chris works in economic development by day, but spends most of his nights thinking about baseball. He writes for Pinstripe Pundits, and is an occasional user of the twitter machine: @_chris_mitchell
View all posts by Chris →
This entry was posted in Analysis and tagged Mark Teixeira. Bookmark the permalink.