Despite solid numbers this season, it just seems like CC Sabathia has not been the “ace” we’ve grown used to since signing him in the 2008 offseason. His ERA, FIP, xFIP, and SIERA all are solid, all 3.56 or lower (ERA and FIP are the only above 3.50). His K/9 and BB/9 are as good as they’ve ever been as a Yankee, but his HR/9 is at a career worst. He’s already allowed 21 home runs, a career high, even with two DL stints this season. Since returning from his most recent DL trip in late August, Sabathia has been prone to surrendering leads, something that shouldn’t be happening with the team’s ace on the hill. It begs the question, is CC’s elbow still bothering him?

The first alarming trend that may indicate Sabathia still being hurt is his significant fastball velocity dropoff. See the chart below, thanks to FanGraphs.com: 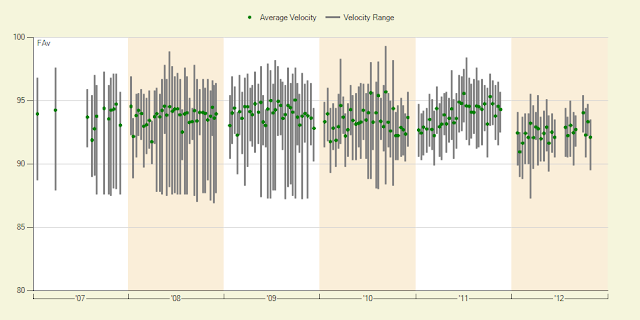 It doesn’t take a brain surgeon to see that his fastball velocity has tailed off in 2012. With each green dot representing his average velocity per start, it’s pretty easy to see that his fastball velocity is still down since returning from the DL, as it has been all year. While Sabathia routinely touched 95 and above in prior years, he’s only hit that level a few times all season. Overall, his fastball is averaging 92.4 MPH in 2012, while it averaged 93.9 MPH last season. With his changeup velocity average being exactly the same as his career mark (85.9 MPH), this makes his change less deceptive, as the velocity difference between the two pitches has contracted. Batters have a 135 wRC+ vs. CC’s fastball in 2012, way up from his career 111 wRC+ on the pitch.

Further evidence that Sabathia may still be favoring his elbow is his fastball release point. Thanks to TexasLeaguers.com, check the animated picture below, comparing 2011 to 2012:

It’s very noticeable that his release point is lower in 2012, which has to make everyone wonder about his health. The other possibility could be mechanical issues, which Chris pointed out to me. He had made a mechanical adjustment earlier this season.

From this information, draw your own conclusions. After Saturday’s game, Sabathia claimed that his struggles since returning from the disabled list have nothing to do with velocity or health. In the same article, Joe Girardi also dismissed the notion that he may be injured.

It’s definitely a catch-22 for the Yankees if Sabathia is truly still hurt. They’re in the heat of a pennant race at this point, and need Sabathia more than ever given the rotation uncertainties for those not named Hiroki Kuroda. However, they also have four more years and $94 million invested in him. There’s a $25 million vesting option for a fifth year, but is based on his health in 2016. How much are they willing to risk CC pitching on a bad elbow for the rest of 2012? How much damage could it do to his ability over what’s left of his massive contract?

Let’s say he’s not injured, and this is just the start of Sabathia in decline. The timing sure would be bad, given the fact that they just signed him to the aformentioned extension this past offseason. Unfortunately, this is a reality for pitchers as they get older, and undoubtedly at some point his velocity was going to start going down, but now at age 32? The Yankees certainly hoped they wouldn’t see signs of signifcant decline until perhaps at least two years into the new deal.

It’s very possible throwing the second most innings in baseball since 2002 could finally be catching up to Sabathia, whether it’s injury or decline. By my count, he should have five more starts before the year is over. Each and every start will be heavily scrutinized, considering his velocity drop, struggles, and the heat of the division race. This is where having that big division lead would have come in handy: Sabathia could have been given some extra rest to get as close to full health as possible and prepare for the postseason (assuming he is actually injured). Nonetheless, the Yankees need him now to pitch with what he’s got, even if the velocity doesn’t return to what we’ve grown used to.

This entry was posted in Analysis, Injuries and tagged CC Sabathia. Bookmark the permalink.