As of right now, the Yankee’s are estimating Mark Teixeira will be out for 10-14 days after re-aggravating his grade 1 calf strain on Saturday. His absence will be quite a blow to the Yankees lineup down the stretch and it certainly threatens his postseason availability. Calf injuries are tricky and are often prone to re-injury if not given proper time to heal. Here’s what Stephania Bell had to say when Derek Jeter went down with the same injury last year:

The biggest challenge with a calf injury is running. It gets particularly tricky a few days after a minor injury, when an athlete starts to feel better walking around, fielding and hitting. But the big test is explosive running. A shortstop such as Jeter may test it when making a big defensive play, but generally the signature move is driving out of the batter’s box on the way to first, which, not surprisingly, was how Jeter suffered the injury in the first place. The muscle contracts hard to advance the weight of the body when pushing off to run, particularly during the first few steps of sprinting. The concern, naturally, is having a minor injury become something bigger.

Obviously, every player and every calf injury is different; but it shouldn’t be too much of a shock that Teixeira’s injury resurfaced as it did. The Yankees will have to be cautious bringing him back as they certainly don’t want to make the injury any worse. Even when he does come back, the real test will be a play where he really has to bust it down the line.

Here’s a list of all players who hit the DL in 2010 and 2011 with calf strains. Unfortunately, teams don’t always announce the severity of the injury (grade 1, grade 2, etc.). But best I can tell based on the injury data from sbnation.com, only Jimmy Rollins’ and Cody Ross’ injuries were considered anything more than day-to-day in the early stages. 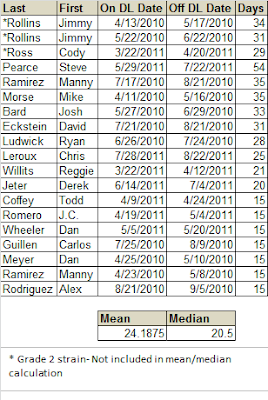 There’s clearly some selection bias here, as this list doesn’t include players who got injured and avoided the DL. So these numbers are likely overstating the severity of the average calf strain. There are also probably a few players on this list who could have returned sooner, but were placed on the 15-day DL to open up a roster spot. Nonetheless, the list gives us a general idea of possible outcomes and it certainly seems possible that he will be back within the 10-14 day window. However, this list illustrates that these injuries are unpredictable and a prompt return is certainly no guarantee.

Chris works in economic development by day, but spends most of his nights thinking about baseball. He writes for Pinstripe Pundits, and is an occasional user of the twitter machine: @_chris_mitchell
View all posts by Chris →
This entry was posted in Analysis, Injuries and tagged Mark Teixeira. Bookmark the permalink.