It’s no secret that Robinson Cano has been scuffling lately. After being arguably the Yankees’ best player for the first 5 months of the season, he’s been downright terrible for the last month. His slump has come at a very inopportune time as Mark Teixeira has been on the shelf with a calf injury. He’s hitting just .204/.297/.386 in 111 plate appearances following Teix’s injury on 8/27.  But what’s behind his slump?

The usual knock on Cano is that he lacks plate discipline. That doesn’t seem to be the issue here though. His BB% over this period has been an uncharacteristically high 11.7% as his career mark is just 5.6%. The plate discipline numbers also back this up. During this period, he’s swung at 48% of pitches thrown to him which is on par with his season average of 49.8%. Here’s an illustration of Cano’s swinging rates after 8/28 compared to before.

So if Cano’s plate discipline isn’t the culprit, then what is? Here’s Cano’s four factors since 8/28- the day after Teixeira first got injured

The blue means he’s swinging less while the yellow/red means he’s swinging more. This is a fairly small sample we’re dealing with, but it looks like Cano’s been slightly more selective if anything. There have definitely been some memorable instances of Cano reaching for pitches outside of the zone over the last few weeks, but that’s really nothing out of the ordinary for Robbie.

The two eyesores here are his ISO and BABIP which are both well below Cano’s career numbers. Both of these can easily be explained by the lack of line drives Cano has hit recently. It seems he’s not hitting the ball with quite as much authority as he was earlier in the year and it’s been dragging down his batting line. 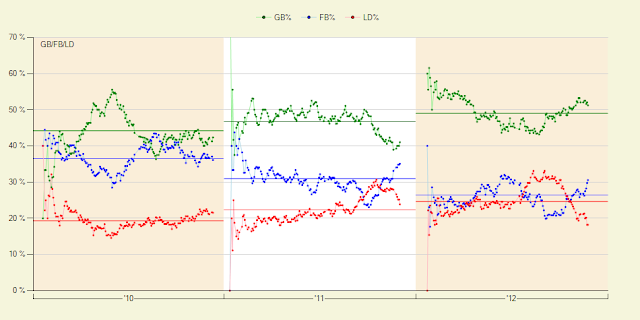 So Cano’s replacing line drives with pop-ups and grounders. Is there reason to panic? Not really. Research shows that LD% is a very fluky statistic. It takes 600 balls in play for a player’s performance to be a better guess of his true talent than simply assuming league average performance. Pitch classification can’t tell us everything about a player’s performance (especially in a small sample) simply because there are more than 3 types of batted balls. It’s entirely possible that alot of the “fly balls” Cano has hit lately were pretty close to being classified as line drives. We’re looking at just 88 balls in play here so there’s little reason for concern. The good news is that there doesn’t seem to be anything fundamentally wrong with his approach as he’s not carelessly hacking any more frequently than he normally does. At this point, we just have to wait for the BABIP gods to stop frowning on Cano.

Data courtesy of Fangraphs and BaseballHeatMaps

Chris works in economic development by day, but spends most of his nights thinking about baseball. He writes for Pinstripe Pundits, and is an occasional user of the twitter machine: @_chris_mitchell
View all posts by Chris →
This entry was posted in Analysis and tagged Robinson Cano. Bookmark the permalink.