After Nick Swisher joined the Indians this past weekend, he became the fourth offensive piece from the 2012 roster to leave. While Russell Martin, Raul Ibanez, and Eric Chavez all were positive contributors with the bat, nobody’s production will be missed more than Swisher’s.

Ichiro is set to be the opening day right fielder, meaning there’ll be a new man in at the position for the first time since Swisher replaced Bobby Abreu in 2009. However, a platoon could be in order if someone like Scott Hairston is brought in. Still, with Ichiro taking the bulk of the plate appearances, how much of a drop off will there be from Swisher?

Creating a template based off of Tom Tango’s Marcel projection system, we can get a general idea of the difference in production. Here’s a simple explanation of the system in Tango’s words:

“The Marcel the Monkey Forecasting System (or the Marcels for short) is the most advanced forecasting system ever conceived. Not. Actually, it is the most basic forecasting system you can have, that uses as little intelligence as possible. So, that’s the allusion to the monkey. It uses 3 years of MLB data, with the most recent data weighted heavier. It regresses towards the mean. And it has an age factor.”

While other systems like PECOTA are much more advanced, Marcel pretty much does just as good of a job as the rest. Plus, it’s something that can be computed in Excel, which is what I did for the purpose of this study. Tango’s official release will be a bit more complex, factoring in a reliability score for each player’s projection. But for now, let’s work with what we do know about Marcel. Here’s a comparison between Swisher and Ichiro: 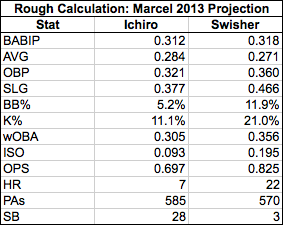 In 2013, Marcel projects Swisher to be a better overall hitter than Ichiro. This should come as a surprise to nobody. Marcel also tempers the enthusiasm that Ichiro’s finish to 2012 created, projecting him to hit below .300, infrequently reach base, and hit only 7 home runs. While I think it’s possible Ichiro could crank out a few extra long balls thanks to Yankee Stadium, it’s not like he’s going to balloon remotely near Swisher’s power production.

Ichiro may provide a leg up in terms of contact and speed, but the loss of Swisher takes away one of the Yankees’ primary on-base and power threats. Brett Gardner‘s healthy return kind of makes him redundant to have along with Ichiro, although the outfield defense should be far better without Swisher and Ibanez playing substantial innings.

Obviously, the $14M AAV Swisher receives from Cleveland doesn’t appear to easily fit into the Yankees’ austerity budget plans. And yes, another downside is that Swisher’s production will probably begin to drop off as he enters his mid-30s. But truthfully, there is no justification for giving Ichiro 2 years and $13M. The Yankees could have instead let Ichiro walk, and effectively be paying Swisher $7.5M AAV if they already were willing to sink $6.5M on the older and less productive Ichiro.

Now, the Yankees are in a sticky situation with a lefty-laden lineup, and dwindling options on the open market. Why did they let Swisher go on such a reasonable contract? Back in August, I estimated a 4 year, $54M pact, and Swish only received $2M total more from Cleveland. Hypothetically, repeating everything else that already happened this offseason, with the exception of the Ichiro re-signing, Swisher could have been retained. Take a look at the tab Scenario A under our new “The Big, Bad, Austerity Budget” page to see how this works. What you’ll see: bringing back Swish at the same rate under the Cleveland deal, settling arbitration cases (Notably Gardner David Robertson), re-signing Cano to a 7 year, $150M deal, and inking Hairston to a 2 year, $8M contract still leaves about $27M for 9 more roster spots. It’s not as if the organization would be without any breathing room.

Sure, Yankees fans are disgruntled about Swisher’s lack of postseason production, but that’s not how teams evaluate players. General Managers buy players for the regular season performance, not perceived ability in the clutch. Remember, you have to get to the playoffs first. Say what you want about his postseason struggles, but Swisher has been an integral part of the Yankees’ road to October since 2009. Losing and replacing him with a lesser caliber player, Ichiro, only makes it more difficult to return to the playoffs going forward.

Any questions about the Marcel template I created or the payroll calculation? Comment and I’d be happy to answer any questions and/or show how I reached the figures discussed.

This entry was posted in Austerity Budget, Offseason and tagged Nick Swisher. Bookmark the permalink.

4 Responses to Quantifying the Loss of Nick Swisher’s Bat