Russell Martin’s departure obviously leaves the Yankees weaker at catcher. Martin was respectable offensively and had the reputation of being a good defensive backstop. Although pitch framing metrics are still in their infancy, most reports agree that Martin excels at framing pitches. According to Mike Fast’s well documented study from last year, he’s been bested only by pitch-framing god Jose Molina over the past few years. It’s estimated that the Yankees prevented about 31 runs in 2012 due to pitch framing. While Chris Stewart also played a role, it’s probably safe to say most of this success can be attributed to Martin.

With Martin out of the picture now, the team may not be able to enjoy the luxury of consistently having an excellent pitch framer behind the plate in 2013. Using this method of comparing plate discipline data with Pitch F/X data, I estimated how many balls were called strikes for each Yankees pitcher last season. Here’s how the Yankees’ current pitchers fared in 2012: 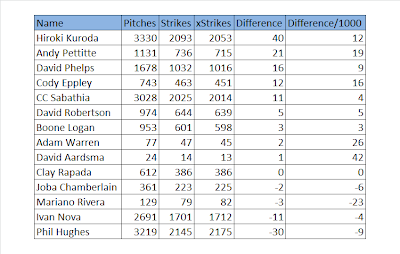 Keep in mind that league average is -5/1000 and not 0. These numbers simply compare called strikes according to the computerized system to strikes that were actually called. So some of this undoubtedly has to do the pitcher himself rather than what the catcher does behind the plate. Still though, catcher framing certainly contributes to some extent.

If one pitcher stands out on this list, it’s Hiroki Kuroda. Logically, it makes sense that catcher framing would have an substantial effect on Kuroda considering his reliance on pitches with movement that would theoretically make things more difficult for the umpire (66.7% of his 2012 pitches were sinkers or sliders).  Kuroda also threw to Martin in LA, so familiarity could also be a factor. I generally don’t buy into battery mate stats due to the sample size caveats—it’s rare that a pitcher throws enough to two different catchers to be able to make any sort of conclusion.  In this instance though, there’s legitimate reason to at least suspect that there may be something to uncover. Looking at the 3 times Kuroda threw to Stewart last year won’t tell us a heck of a lot, but his entire 2011 season (his only without Martin) could be more revealing:

There’s a pretty substantial difference between the two seasons. 2011 Dodgers catchers Rod Barajas and Dioner Navarro were both consistently below-average according to Fast’s study which makes sense with these numbers. Research shows that each missed call is worth about .13 runs. So were looking at a difference of about 6 runs– not drastic, but definitely noteworthy.As stated, Kuroda relies heavily on pitches with movement which could potentially fool the umpire as well as the batter. Here’s a look at his sliders in 2011 vs. 2012:

He obviously threw quite a few more sliders, but clearly had a wider-than-normal strike zone as well. So it appears that Kuroda could in fact suffer without Martin’s pitch framing. We’re only dealing with a difference of a few runs, though, so it’s not going to make or break his season or anything. Still though, it might make sense for Kuroda to throw to whichever catcher on the roster is best at framing pitches to help him get those borderline calls. If nothing changes between now and opening day, that catcher will likely be Chris Stewart who has graded out very well albiet in a limited sample.

Chris works in economic development by day, but spends most of his nights thinking about baseball. He writes for Pinstripe Pundits, and is an occasional user of the twitter machine: @_chris_mitchell
View all posts by Chris →
This entry was posted in Analysis, Offseason and tagged Russell Martin. Bookmark the permalink.