Mark Teixeira has always been slightly better hitting from the right side, but his rapid decline from the left side the past three seasons has merited great concern. He’ll be 33 in April: is age an issue? What about his swing mechanics? Is the short porch actually hurting his production? These are major questions for a guy with four more years remaining in pinstripes.

Teixeira’s contract, an 8 year, $180M deal signed four offseasons ago, may become an albatross, if it hasn’t already, should this trend left-handed continue. He was one of the biggest prizes of that offseason, but is no longer playing up to the value of his contract.

Mark’s swing mechanics have changed, and certainly factor into his production falloff. The allure of the short porch at Yankee Stadium has made Teixeira increasingly pull-happy, leading to an uppercut swing. The following videos and pictures document this shift perfectly: this home run swing toward the end of his stint with Atlanta (prior to a trade to the Angels) in 2008, and this home run in April. To further illustrate my point, I took freeze frames at the points of contact. Then, I drew lines from the nose to the ground and from the back knee to the ground. Take a look at the pictures, and read the analysis afterward. 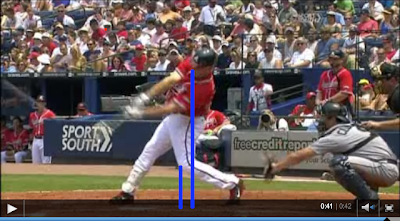 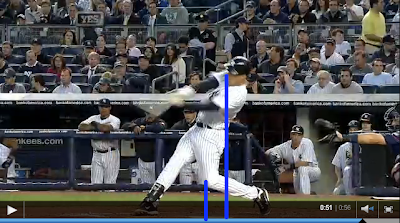 As you can see in Atlanta, the two lines are very close together, indicating good balance through the point of contact. Yet, with the Yankees, the lines are further apart. The line from the nose down is much further back, showing that Teix is back on his heels at the point of contact. This stems from an uppercut as the bat’s path is moving upward, rather than the more level swing he showed with the Braves. Moreover, you can just look at the alignment of Teixeira’s back in both pictures to see the difference in weight balance. In Atlanta, his back is practically in line perpendicular to the ground, while as a Yankee, his back creates an acute to the ground.

This is by no means a perfected study, as I don’t have the access to the same amount of video as the coaching staff. But, it provides a general idea of how Teixeira’s swing has become a product of Yankee Stadium. This isn’t a revelation, Teixeira admitted that the right field short porch is attractive:

“The reward of pulling the ball in Yankee Stadium as a lefty is great. I won’t deny that. And there’s no reason I can’t continue to pull the ball. But on that middle-away pitch, rather than smothering it to the second baseman, I need to hit that ball up the middle or the other way. I need to hit more singles.”

In the same article during Spring Training, he spoke about fixing his bat path. Basically, he was attempting shorten his swing and hit the ball to all fields, rather than be pull happy with his uppercut. However, after a slow start in typical Teixeira fashion, he went right back to his comfort zone.

Obviously Teixeira is not paid to hit a bunch of singles, even though he felt the need to hit more of them back in March. Still, though, he’s not getting paid $22.5M per year to post a wRC+ of 112 in the last three years batting lefty. Want some perspective? Will Venable has put up the same mark the past three seasons. Teixeira is the third highest paid first baseman in baseball, behind Albert Pujols and Prince Fielder, but is 12th in wOBA and wRC+ at the position since 2010. In other words: middle of the pack. He may have the 3rd most home runs for first baseman during that time, but that doesn’t measure his true performance level like wRC+ and wOBA.

As I mentioned introducing the article, Teixeira’s swing right-handed has remained consistently productive. Why? It’s his natural side. Because he was taught to hit left handed, he’s more prone to mechanical flare ups as a lefty. Understandable, but still: Teix was elite from the left side from his rookie year through 2009. If age hasn’t brought down his right-handed hack, it’s probably not the main cause of his issues as a southpaw. It truly seems like the attraction of the short porch has been the primary culprit.

Is his long uppercut a mental block at this point? If nothing improves going forward, it’s quite possible. Regardless of the mechanics, the bottom line is that the Yankees need better performance from Teixeira offensively going forward. With $22.5M committed annually for the next four seasons, a huge chunk of payroll is taken up making it essential for the club to receive as much value possible per dollar spent. If Teixeira continues his decline and the $189M ownership mandate stays in place, it’s a realistic possibility that the Yankees will inch closer to non-contention.

This entry was posted in Analysis and tagged Mark Teixeira. Bookmark the permalink.