With Nick Swisher and Rafael Soriano joining Cleveland and Washington respectively, the Yankees have tacked on two extra draft picks in addition to the one they already had. Here’s what things currently look like at the bottom of the first round, thanks to Baseball America:

The 27th pick is the selection the Yankees have had all along, although it has bumped up two spots since the Angels signed Josh Hamilton and the Braves agreed with B.J. Upton. There’s still a chance for the 27th pick to become the 26th or 25th choice, depending on where Loshe and Bourn wind up. Or, if St. Louis or Atlanta re-signs Lohse and/or Bourn, they would not get the compensation selections denoted as “xx”, which would bump up the Yankees’ compensation selections.

What type of ballplayers might the Yankees draft with these picks? Thanks to Baseball-Reference’s draft page, we can find how how other teams have performed picking at the same slots. I exported all-time data from selections 1-33 (33 being the final possible spot the Yankees may pick in 2013) along with each selections’ career rWAR. This is the same source I used when I analyzed the Yankees draft history a earlier this month. 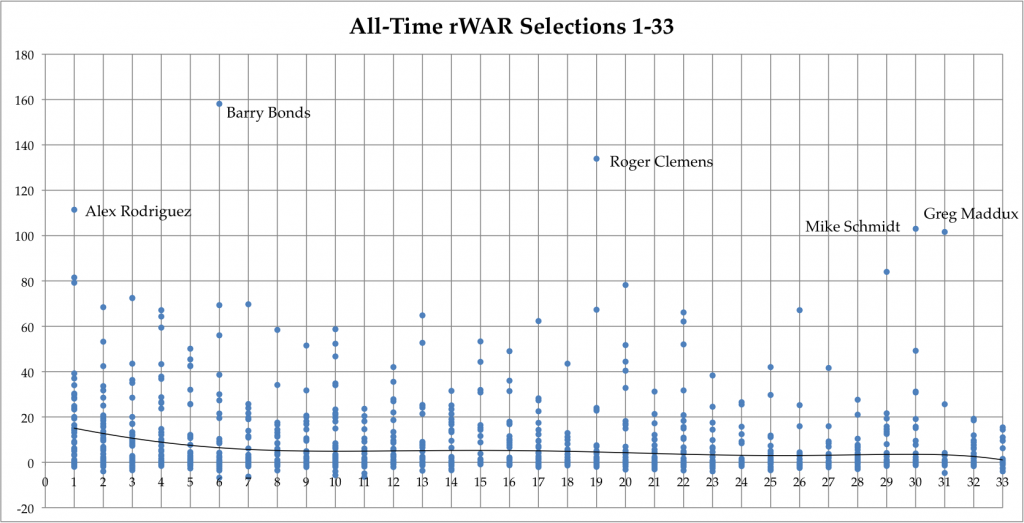 Here’s another graph, this time by average rWAR per draft choice: 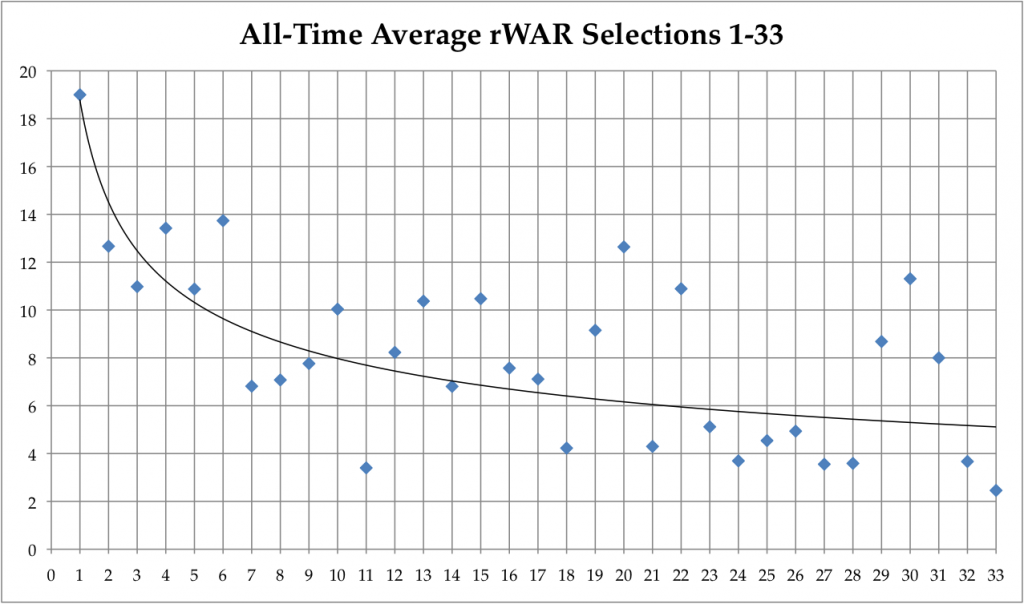 The second graph using average rWAR by selection is a bit more useful, although the first one is interesting because it shows some of the outlying players.

As you can see, the value of a selection closer to the beginning is considerably higher, which is no shocker. FanGraphs did a study on this earlier this month; I just wanted to narrow it down to selections 1-33.

Unfortunately, these graphs are bad news for the Yanks. It appears odds are slim that the Yankees will get one starting caliber player out of any of their three picks, based on the draft’s history. Wherever the three picks wind up doesn’t really matter. They’ll all be toward the end of the first round, where there are no guarantees (not that the beginning is a slam dunk, but odds are better). Is there a chance the Yankees get a stud? Sure, but a slim one.

I’ll provide some outliers to give some semblance of hope. At 25, Chuck Knoblauch, Matt Cain, Bill Buckner, Mike Trout, and Matt Garza top the list. Trout, if you remember, was a compensation pick for the Yankees signing Mark Teixeira. 26 has had some fruitful choices, albeit not recently: Alan Trammell, Dave Henderson, and Dan Plesac. 27? Same deal as 26: Vida Blue and Pete Harnisch. This trend continues throughout these late round picks, moving a little further down to 30: Mike Schmidt, David Wells, Travis Fryman, Jerry Reuss, Brian Jordan, Terry Forster, Moose Haas, and Chris Sabo. The two best choices at pick 31 have been Greg Maddux and Jarrod Washburn. 32 includes Dave Magadan, Lee Lacy, and Justin Thompson. Lastly, 33 features Mike Gallego and Dave Burba.

Those are 25 successful players at six different draft slots since 1965, all with at least 10 rWAR. Simple math tells us that in these 47 drafts, these six picks have been made 282 times. I’ll take out the last four drafts since many of those guys are still developing,  which leaves us at 258. With 25 useful players in those six slots, that’s a 9.7% success rate.

The Yankees have made some mistakes in the past at 27, 30, and 32, choosing Eric Duncan, Andrew Brackman, and Cito Culver. Ty Hensley was the 30th selection last year, so hopefully he can buck that trend.

Remember, the end goal of the draft isn’t always to produce a player to join the Major League roster in a few years. There’s also an opportunity to create good prospect buzz and trade value around these selections as they advance through the system. This will be essential over the next few years as the Yankees manage the $189M budget. Because they probably won’t be big free agent spenders in the near future, the organization is certain to be out on the trade market for young talent already in the bigs (not specifically, but think Justin Upton). Acquiring those players of that nature require good farm systems, which is what makes this draft so important.

2013 may be make or break for scouting director Damon Oppenheimer. Can anyone guarantee late first round success? Of course not. But with 3 selections around at a similar point, he better hope the eventual harvest pans out. He’ll have time to see the progression of this draft class, which will allow him to save his job or watch is own demise. One thing is for sure: if 2013 turns out to be another poor performance, it probably will be curtains for Oppenheimer.

This entry was posted in Amateur Draft and tagged Damon Oppenheimer. Bookmark the permalink.