By now, you’ve probably read all about the Yankees strategy to reach a Competitive Balance Tax payroll below the $189M threshold. Instead of looking forward, let’s take a look to the past. Using transaction and contract data published by Baseball-Reference and Baseball Prospectus, we can review the Yankees’ spending trends since the end of the 2000 season.

As I compiled the data, I separated the total amount of money spent each season into two parts: cash commitments to acquire new players (free agent or trade) and to retain team free agents. Note: while some of you may gather this from looking at the forthcoming charts, I  included players who opted out (For example: Alex Rodriguez in 2007 and CC Sabathia in 2011) in the retained section. Simply put, if a player was with the Yankees the year prior to a new deal, he’s not factored into external signing dollars (Derek Jeter, Jorge Posada, Andy Pettitte, etc.). That last qualification probably doesn’t need explanation, but I want to cover every detail. Additionally, as you will likely figure out, each season’s spending is the aggregate of total dollars committed over the life of all new contracts added. Players traded for (including in-season) with guarantees going forward are also included in these sets.

I don’t need to tell you the Yankees aren’t shelling out dough like they used to – that’s clear as day. Instead, let’s quantify it, starting with the total money spent on all players vs. total money spent adding new players since 2000: 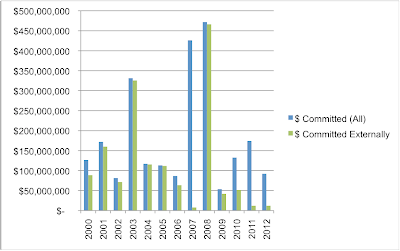 To no surprise, the 2003, 2007, and 2008 winters stand out. ’03 featured the likes of Rodriguez, Gary Sheffield, Kevin Brown, and Javier Vazquez. ’07 also includes A-Rod, with the lone external signings being Jose Molina and LaTroy Hawkins. Sabathia, Mark Teixeira, AJ Burnett, and Nick Swisher were the big additions of the 2008 offseason.

Now take a look at the money adjusted for inflation (CPI): 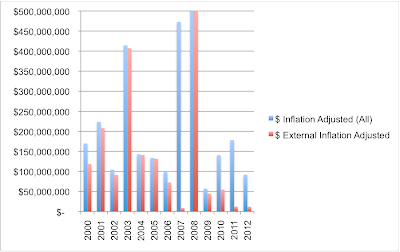 You can see that while 2007 and 2008 still are far ahead of 2003, the difference isn’t as large as in nominal terms.Let’s get to what’s more relevant to today: the austerity budget. What is blatantly obvious from both of the charts is the comparative lack of spending since the 2008 offseason. No need to ask why: the Yankees have a few of reasons to get under the tax threshold (highest tax rate and revenue sharing rebate). It’s cliche by now, but this organization isn’t the same one we were accustomed to under The Boss’ reign.Here’s a better look at the trend in spending: 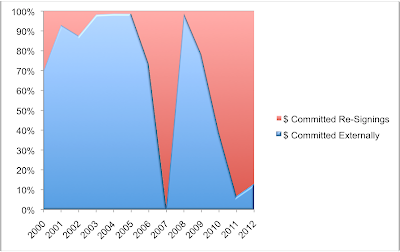 The blue area indicates the percentage of commitments allotted to new players, while the red shows the remaining portion of dollars spent on retaining talent. Outside of 2007, the Yankees consistently used the vast majority of money committed toward players outside the organization in attempt to improve the club. From 2000-2009, the team allocated 74% new salary to players from the other 29 clubs. Removing 2007 from that 10 year span, the club added 93% of new commitments from outside the organization. This offseason, 13% of salary added going forward is completely designated to one player: Kevin Youkilis. 2011’s percentage is actually less, but skewed by retaining of Sabathia for $122M. Since 2010, the front office has added 19% of salary commitments on external players.

Now that is a fiscal cliff.

The perception is that there hasn’t been a “big ticket” acquisition since Curtis Granderson after the 2009 championship season. For the Yankees, three straight winters, let alone one, with no new toys is a rarity. However, many teams would have considered Russell Martin and Rafael Soriano in 2010, Hiroki Kuroda in 2011, and Youkilis this offseason as major acquisitions. For the Yankees, these guys aren’t the big star pickups.

There’s no doubt the Yankees have raised expectations by spoiling the fans, so frustration from the fanbase is understandable.Has ownership been trying to improve the club? Yes, but only within their boundaries since the new CBA was agreed upon after the 2011 season. Since then, the only multi-year deal was awarded to Ichiro (oddly).

Don’t expect anything other than one-year pacts until the payroll is cemented below the $189M threshold in 2014.For those upset by this trend, or those who simply don’t understand management’s reasoning, refer to our austerity budget resource to keep track of the team’s 2014 obligations.

Furthermore, I highly recommend reading this article explaining what’s at stake if the Yankees fail to meet the $189M threshold in 2014.Lastly, don’t expect anything to change next offseason. It’ll be all hands on deck to ensure the payroll plan remains in tact. Unfortunately, there’s a decent chance others in the division leapfrog the Yankees by then.

This entry was posted in Austerity Budget, Ownership. Bookmark the permalink.