Although opening day is a week away, it’s still pretty unclear what the Yankees’ lineup will look when the season starts. Injuries to Mark Teixeira, Curtis Granderson, and Derek Jeter have left the team with massive holes around the diamond. Jeter may be able to DH early on, but we’ll just assume he’s a no go for sake of argument. Given the team’s roster construction, I don’t think it makes sense to carry another DH-type player. At this point, there are still quite a few players with a realistic chance of getting starts at these positions in the first weeks of the season. None of them may be all that great, but the Yankees do have plenty of options in camp.

As a result, the Yankees will probably end up establishing platoons in order to get the most production possible out of these players. As it stands, first base, left field, and shortstop are wide open. I’m assuming Travis Hafner will be platooned, so there should also be an opening at DH versus southpaws. First base candidates include Dan Johnson, Juan Rivera, and Ronnier Mustelier who would slot in at third with Kevin Youkilis shifting to first. In the outfield, the Yanks are looking at Vernon Wells (unfortunately), Rivera, Mustelier, Melky Mesa, Thomas Neal, Brennan Boesch, and Ben Francisco. The infielders are Eduardo Nunez, Jayson Nix, and Gil Velazquez.

In The Book, Tom Tango derived a method of using past performances to predict a player’s true talent against right handed and left handed pitchers. Using his research, I’ve estimated how each of these players projects in terms of wOBA against righties and lefties. I did not include minor league stats. So guys without big league experience like Mustelier and Mesa essentially project to have a league average platoon split.

It’s tempting to simply look at a hitter’s platoon stats from the last couple of years and make judgements. The issue is that these stats come with major sample size caveats, especially when dealing with part time players. Tango’s method assumes that a player’s platoon split remains constant throughout his career which is not necessarily true as players often make adjustments. Nonetheless, it’s a better gauge than observing platoon splits from fragments of recent seasons. Here are the projected wOBA’s for the players competing for roster spots. 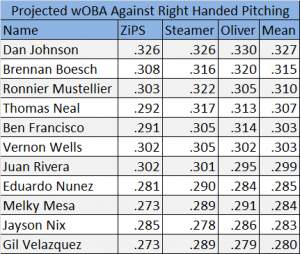 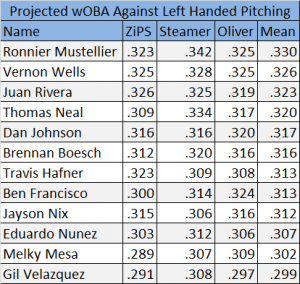 Looking at these projections, the thing that stands out most are Mustelier’s wOBAs. He projects relatively well versus both hands. It’s a bit risky to trust his projection though. as it’s based off of just 150 minor league games. He’s really the wildcard in this mess of replacement level-ish players. As a result, the Yankees may want to send him to AAA for more seasoning. Setting Mustelier aside, it looks like the logical thing to do would be to platoon Johnson and Rivera at first, and Boesch and Wells in left. Hafner will DH against right handers, but may benched against southpaws.  It also might make sense to feature a Nunez/Nix platoon at short. Even though they’re both righties, Nunez displays a slight relative advantage against same-handed pitchers while Nix has a relative advantage against lefties due to his extreme career platoon split.

The downside of having multiple platoons is that it can really compromise the bench if a team lacks positional flexibility. That’s certainly the case with the Yankees as they would be set to open with a few defensively challenged players in Hafner, Boesch, Johnson, and Rivera. The acquisition of Wells likely means there’s no room for Melky Mesa. This is unfortunate as he would make a good outfield defensive replacement/pinch runner. Given the aforementioned glut of slow, poor defenders, a guy like Mesa would certainly come in handy. Mesa could also make the team in lieu of Dan Johnson. Based on the projections, Johnson seems to be an obvious choice to get the lion’s share of at-bats at first. However, he’s a a classic quad-A guy who has spent most of the last 2 seasons in the minors. He’s also had a putrid spring (.065/.275/.065).

Frankly, it’s not really clear what the team will or should do simply because there are so few good options. Joe Girardi will have some tough decisions to make and will probably end up riding the hot hand for a couple of the lineup spots early on. Overall though, most of his lineup decisions should be dictated by the arm of the opposing pitcher.

In the last couple of years, we have seen teams like the Rays and A’s running multiple platoons in their lineups in order to get the most out of their role players. This seems to be a new market inefficiency that many of the low-budget teams are utilizing these days. In the past, the Yankees have fielded relatively stacked lineups where platooning didn’t really make much sense. This year, that type of approach seems to be the best option with the group of players they have. Girardi loves to play the match-up game so he’ll certainly try to get the platoon advantage as much as possible. Luckily, the Yankees have players guys like Hafner, Rivera, and Nix who have an established track record of extreme platoon splits which should help the team to make the most out of a depleted lineup.