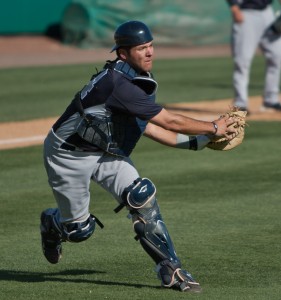 As if the Yankees didn’t already have enough injuries, Francisco Cervelli and Ivan Nova have now joined the team’s walking wounded.  Cervelli fractured his hand after being struck by a foul tip in the first inning while Nova was forced to leave the game with elbow pain. Nova’s getting an MRI on his elbow, so we should hear a diagnosis within the next couple of days. As for Cervelli, the team will have to go without him for at least 6 weeks as surgery will be required. This is a really tough break for both the Yankees and Cervelli as he was performing surprisingly well thus far. Thanks to a 144 wRC+ and improved defense, he had essentially seized the starting catcher title over Chris Stewart.

Now, the Yankees will look to prospect Austin Romine to step up and share the load with Stewart. Romine’s star has faded significantly in the last few years. After hitting well in the low minors, his offensive game has stalled out a bit as he’s ascended through the Yankees’ minor league system.  He’s also been plagued by injuries the last couple of years, appearing in 98 and 31 games in 2011 and 2012 respectively. Nonetheless, his defensive skills are supposed to be major-league ready even if his bat may not quite be ready follow suit. For what it’s worth, which isn’t very much, he was hitting .341/.400/.415 in 45 AAA PA’s. A .464 BABIP copled with a 26.7 K% also makes that line less exciting. In fact, his performance actually caused Steamer to slightly downgrade his projected MLB batting line from an 84 wRC+ to an 80 wRC+.

I’d expect the Yankees to employ a similar strategy to what they did with Cervelli and Stewart heading into the season—have them split the playing time somewhat evenly until one of them gets hot. It’s kind of been overshadowed by Cervelli’s hot start, but Stewart is hitting over .300 has looked solid both behind the plate and next to it in his 8 games. So I’d imagine he’ll have a slight playing time edge at least for now.

Another name to keep in mind is J.R. Murphy. He’s currently raking to the tune of .293/.408/.552 in AA Trenton and could be in AAA before long, especially now that there’s an opening at catcher. This would also open a spot in Trenton for Gary Sanchez who will probably warrant a promotion to AA sooner or later. Murphy could easily be a factor in Bronx come August or September given the current options’ lack of talent and durability. Murphy’s defense has been spotty though, so he’d probably have to make some improvements on that front before he receives any serious consideration.

Between Stewart and Romine, Romine clearly has the higher upside, particularly from an offensive standpoint. However, he’s still very much of an unknown at this point. We know what Stewart is.  He doesn’t hit much at all, but is an adequate catch and throw guy on defense and an excellent pitch framer. Romine, on the other hand, has a strong reputation and should at least be an average receiver, but Cervelli was also a highly regarded defensive prospect before looking lost behind the plate for the better part of two years. Sometimes, it’s hard to predict how one’s tools will transition to the big leagues.

I’d like to say that the Yankees will look externally to bring in a more proven catching option. But after watching them sit on their hands all offseason, I really don’t think they would be willing to acquire anything more than a marginal upgrade. For now, the Yankees will just have to hope that Cervelli’s rehab goes smoothly and that he picks up where he left off when he returns. As for Romine, hopefully some of his hot start carries over to the majors and he’s able to provide something more than replacement level production.

Chris works in economic development by day, but spends most of his nights thinking about baseball. He writes for Pinstripe Pundits, and is an occasional user of the twitter machine: @_chris_mitchell
View all posts by Chris →
This entry was posted in Analysis, Injuries and tagged Austin Romine, Chris Stewart, Francisco Cervelli, J.R. Murphy. Bookmark the permalink.

3 Responses to With Cervelli injured, Austin Romine will get a chance