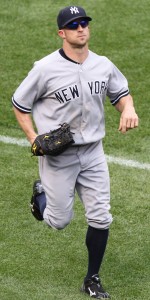 So far this year, we have seen Brett Gardner take a relatively new approach at the plate. In the past, Gardner’s swing percentage has consistently ranked at or near the bottom of all hitters in baseball. He only swung at one third (33.8%) of the pitches he saw from 2008-2012. This mark was bested only by Luis Castillo’s 31.5%. Basically, Gardner has stood at the plate, hoping to draw a walk, and only swung when he was required to do so. Things have been a little different this year though as he’s swung at 42.9% of pitches, not too far off the league average of 45.4%.

According to this Baseball Prospectus article, his shift in approach has been no accident. It’s the result of working with Kevin Long to become more aggressive in hopes of connecting on a greater quantity of hittable pitches. When you’re letting two thirds of all pitches go by, you’re bound to miss out on a few that are right down the middle. It’s easy to see the logic behind this change in Gardner’s approach. As important as plate discipline is for a batter, hitters do most of their damage when the ball is put in play. But Brett Gardner is not like most hitters. In fact, I would argue he’s a pretty bad hitter. He’s been about league average (99 wRC+) in terms offensive production in his career which is certainly nothing to sneeze at. However, much of his production has stemmed from his high walk rate. In terms of actual hitting ability, he’s a .265 hitter with barely any power. On balls that he put in play, including homeruns, he held a .339 wOBA from 2008-2012 which falls well short of the league average of .369. Frankly, Gardner doesn’t do too much with the pitches he puts in play. So the benefit to be had by putting the bat on the ball more frequently is limited. His new strategy has worked out OK for him so far as evidenced by his 107 wRC+, but his .171 ISO is almost certainly unsustainable. This will certainly be an interesting narrative to follow this season.

With a punchless hitter like Gardner, pitchers have little reason not to go right after him. So could this change be in response to pitchers throwing him more strikes? That doesn’t seem to be the case looking at his 2011 Pitch F/X Data (He was injured for most of 2012) for pitches thrown to him.

There was no noticeable trend in terms of strikes thrown to him in 2011. If anything, it looks like pitchers threw him fewer strikes over the course of the year These numbers also appear to be in line with the 60.3% mark from 2010.

There is really nothing obvious that spurred this change. Gardner posted a 99 wRC+ from 2011-2012 which is certainly acceptable. If Gardner is able to show a sharp batting eye in terms of which choosing additional pitches to hit, it’s possible he could benefit. Even so, his walk rate would certainly drop and it’s not clear that he has the hitting talent to compensate by hitting those extra pitches. It’s also worth noting that a walk from Brett Gardner is better than a walk from most players given his elite abilities on the base paths. For what it’s worth, Gardner has swung at 28.6% of pitches outside of the zone which is way above his career mark of 20%. We are dealing with a relatively small sample size though. So up to this point, it appears he’s just been more aggressive in general.

For most of his life, Gardner’s hitting potential has not been highly regarded. He was originally cut from walk on tryouts at the College of Charelston and his offensive game was doubted by scouts throughout his minor league tenure. The fact that he is able to be an average offensive player in the major leagues is pretty remarkable. So I’m not sure it makes sense for him to tweak what has gotten him this far. For most hitters, there is such a thing as being too passive at the plate and missing out on good pitches. In Gardner’s case, however, he probably doesn’t have the skills to do much with those pitches anyway. As a result, his optimal strategy may be to be extremely patient in order to draw walks and use his speed to produce runs.

Chris works in economic development by day, but spends most of his nights thinking about baseball. He writes for Pinstripe Pundits, and is an occasional user of the twitter machine: @_chris_mitchell
View all posts by Chris →
This entry was posted in Analysis, Thoughts and tagged Brett Gardner. Bookmark the permalink.

2 Responses to Brett Gardner and fixing what isn’t broken