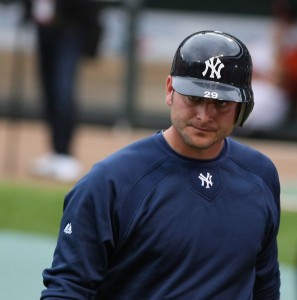 Heading into spring training, the Yankees’ catching situation was in disarray. The team was set to split the catching duties between two lackluster candidates—Chris Stewart and Francisco Cervelli. Stewart had the reputation of being a solid defender and excellent pitch framer, but was all sorts of bad offensively with a career 58 wRC+. Cervelli on the other hand, had been poor both offensively and defensively. Although he had a solid defensive reputation while he was working his way through the Yankees’ system, he had thrown out just 20% of base runners in the majors. He was exiled to the minors heading into the 2012 season and responded by producing a weak 89 wRC+ in AAA. Really, nothing about his 2012 indicated that he deserved a big league job. Nonetheless, he received a spot by default when the team went into penny-pinching mode and allowed Russell Martin walk without bringing in any sort of viable replacement (Sorry, Bobby Wilson).

Essentially, it was looking like Yankees were heading into the season with two replacement-level catchers. It’s still very early, but from what we’ve seen so far, Francisco Cervelli is something better than a AAA caliber catcher. He’s gotten off to a torrid .360/.500/.520 start, and has essentially nabbed the starting catcher job. We’re only dealing with 32 plate appearances so we can probably hold off on the Johnny Bench comparisons for the time being. Still though, there’s reason to be excited about what Cervelli’s doing. Heading into the season, ZiPS projected Cervelli for a .280 wOBA. At this point, his rest-of-the-season projection is .292. So based on those 32 PAs, ZiPS’ perceived level of his offensive talent has risen .012. That’s a pretty substantial shift for so few added data points.

There are reasons why it might make sense to overlook Cervelli’s 2012. For one thing, the 2012 Empire State Yankees lacked a home stadium. It’s difficult to quantify how much of an effect that would have; but, it’s easy to see how that could be strenuous for a player. It’s also possible that his confidence took a hit from being sent to the minors after spending 2010 and 2011 in the Bronx.

There were also reports in spring training that Cervelli had made improvements to his defense. As mentioned, he had a good reputation up until he first received substantial major league playing time in 2010. So it’s feasible that the underlying skills are there for him to be a reliable defender. For what its worth, runners haven’t even tested him in 9 games this season. He threw out Prince Fielder, of all people, on April 6th and nobody has run on him since. His defense will be something to watch since that’s the area where Stewart and Austin Romine hold a clear advantage over him.

Realistically, Cervelli will still probably be a below average hitter going forward. Nonetheless, there’s reason to be optimistic since it’s not like he’s completely lucked into this strong performance. He’s drawn 7 walks to only 1 strikeout and has hit line drives 37.5% of the time. That is a very small sample, but it’s also about as good of a performance as you can expect to see. At the very least, this start to the season has earned Cervelli the lion’s share of starts at catcher for at least the next month or so. Regular playing time is not something he’s ever really had in the majors, so it will be interesting to see if he seizes this opportunity.

3 weeks ago, it seemed very peculiar that the Yankees decided to hand the majority of the catching opportunities to an “offensive-minded” catcher who didn’t hit much in AAA last year. At this point though, I’m beginning to wonder if the Yankees’ scouts saw something in Cervelli that eclipsed his AAA stats. At the same time, lots of bad players go through 9 game stretches where they put up excellent numbers. Cervelli’s performance is really only standing out because it’s happening at the beginning of the season. Hopefully, Cervelli has turned some sort of a corner and he will continue to produce.  However, there’s a very good chance that this article will seem silly come July when Francisco Cervelli is playing like Francisco Cervelli.

Chris works in economic development by day, but spends most of his nights thinking about baseball. He writes for Pinstripe Pundits, and is an occasional user of the twitter machine: @_chris_mitchell
View all posts by Chris →
This entry was posted in Analysis and tagged Chris Stewart, Francisco Cervelli. Bookmark the permalink.