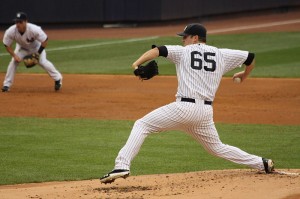 After Phil Hughes‘ first two starts, I must admit that I was slightly concerned that this article might prove to be very foolish. Now, in his most recent two outings, Phil appears to be getting back to what he was in the second half of 2012. I don’t want to get overly excited about two starts, just like I shouldn’t have gotten too concerned over his first two games, but there is some evidence that Hughes is poised for a strong 2013.

The first thing that has noticeably improved is his velocity. He averaged 91.1 and 91.4 MPH in his first to go-rounds, but has beefed up to 92.5 against Arizona last week and 92.2 in yesterday’s outing vs. Tampa Bay. Hughes fastball is straight as an arrow, so a one mile per hour tick in velocity shouldn’t make too much of a difference, but it does show that Hughes might be rounding into shape. Remember, he missed much of spring training with a herniated disc. We should take the velocity spike, which is very slightly above the 92.0 MPH he averaged in 2012, as a sign that Hughes is nearing or at full strength.

There’s more to it than shaking off the rust, however. Hughes has also made an adjustment in his approach. He has incorporated his slider much more in his last two starts, throwing the pitch 23.9% and 20.2% of the time in each outing respectively. In his first two appearances, he offered it just 12.6% and 13.3% of the time. This is no coincidence; when I predicted Hughes to have a big season, I wrote that his re-found slider should play a big factor this year. Last night, all six of his strikeouts ended on a slider.

One might say that the Diamondbacks and Rays lineups are subpar, making Hughes’ performance much less impressive. Perhaps it was a contributing factor, but there are two clear cut changes since his second start that can only be seen as positives. Hopefully, Hughes can continue to build off this mini-streak. Not only would it be good for the Yankees this season, but it would help fatten Phil’s wallet this winer.

One Response to Phil Hughes shakes off the rust; makes an adjustment