After shutting down the Blue Jays last Friday, I wondered: Is Hiroki Kuroda the Yankees’ best pitcher? This year, he’s been the de facto ace of the staff. This is no knock against CC Sabathia, who still has posted strong numbers despite the scrutiny of his velocity. When push comes to shove, Sabathia deserves the ball in a do or die spot. But, Kuroda deserves an immense amount of credit.

Since joining the Yankees last season, Kuroda has made 44 starts (including two postseason outings), and the Yankees have won 27 of those games (61.4%). He’s posted a stellar 3.04 regular season ERA, and a 2.81 ERA in a 16 inning postseason sample. He’s been nothing short of fantastic, and has certainly exceeding expectations before donning the pinstripes. While he was a very good pitcher with the Dodgers, nobody could have foresaw this excellence after transitioning to the American League.

What’s been most impressive about Kuroda is his consistency. It seems that day in and day out, Hiroki can be penciled in to the seventh or eighth inning, allowing only a couple of runs. To figure out just how steady he’s been, I crunched some numbers using game score, a statistic Bill James invented to measure the quality of an individual start. The computation of the stat can be found here.

According to Baseball-Reference, a game score of 50 is considered average. John Dewan wrote that any game score of 65 and higher should be considered a gem, noting the fact that over the past 10 seasons (dated from 2011), a team wins 81.5% of the time a starter posts a score of 65 or better. Based on this information, 17 of Kuroda’s 44 (38.6%) starts have been “gems”, while 31 of them have been average or better (70.4%). For the sake of comparison, Kuroda’s delivered a better portion of gems since last season than Sabathia, who met the qualification in a third of his 36 starts.

Kuroda’s mean game score is 57.8, which while not considered a gem under Dewan’s definition, is certainly very good. His median mark is slightly lower at 57.5. Kuroda’s standard deviation is 16.4, so when he falls one half of a deviation below the mean, he’s slightly below average (57.8-8.2=49.6). Keeping in mind a normal distribution, and using the NORMDIST function in excel, the probability of Kuroda being average or better is 68.3%. The probability of him tossing a gem is a little less than one in three.

How does game score correlate to team wins? Back in 2007, SABR’s Jeff Angus examined team winning percentages vs. its starter’s game score. As a preface, some of this data has certainly changed over the past few seasons, but it is certainly a solid baseline to measure against Kuroda. Here’s what he found for 2007: 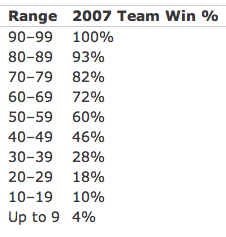 How often has Kuroda fit into these categories?

For this analysis, I’ll consider anything 39 or below (since it brings win percentage to 28% or less) a dud. Kuroda has only tossed six duds since joining the Yanks. Essentially, Kuroda has at least been competitive in 86% of his starts (70% or more if you want to go by a game score 50 or greater), which is truly remarkable. Like I said at the beginning of this piece, it seems as if he can be counted on night in and night out, and his game scores certainly support this notion.

There is no guarantee a 38 year-old pitcher like Kuroda can hold up the rest of the season, but it sure seems like nothing is stopping him. He’s been the backbone of the rotation since joining the club last year – carrying the load while others have scuffled (Phil Hughes and Ivan Nova) or dealt with injuries (Sabathia and Andy Pettitte). Simply put, there really isn’t anything not to like about Kuroda, and his track record instills confidence going forward.