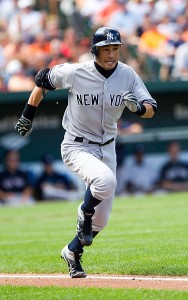 The Yankees are only a month and a half into Ichiro Suzuki‘s new contract, and it already looks like they will rue the day the two sides reached a deal. Well, perhaps the business side of the organization is pleased, but I digress. Ichiro is hitting .239/.280/.328 through 145 plate appearances, and finally broke a 22 at-bat hitless skid last night. At this point, it is hard to be optimistic about him going forward.

It shouldn’t be a surprise that Ichiro is scuffling. From 2011 through 2012, Ichiro hit .277/.308/.361 in 1,384 plate appearances. That’s good (bad, really) for a 84 wRC+ in his age 37 and 38 seasons. With this in mind, I can’t imagine a scenario in which the organization’s baseball ops department expected him to revert back to his previous performance. Ichiro was a beast last September (.362/.376/.486 in 112 plate appearances), but sample sizes do not justify a two year, $13M deal for a guy pushing 40 that has barely hit since he turned 37. This isn’t groundbreaking stuff here, but it sure is frustrating. Now, the Yankees are stuck with an overpaid fourth outfielder, who will probably get more playing time than deserved based on reputation alone.

One might point to Ichiro’s low .261 BABIP this season as a leading indicator of oncoming improvement, especially considering his .357 mark in his career through 2010. However, from 2011-2012, Suzuki’s BABIP stood at .297. Again, that’s across nearly 1,400 plate appearances, and thus much more likely his current true talent level.

Ichiro’s contact and batted ball stats further the notion that his BABIP hasn’t been subject to bad luck. Keeping in mind that contact rate and line drive rate stabilize at 100 and 150 plate appearances respectively, there are legitimate reasons to be concerned about Ichiro going forward. Remember, he’s had 145 plate appearances, so we can rely on his contact rate and just about trust his line drive rate thus far. Compared to last season, Ichiro is putting the bat on the ball 5.4% less often, while 3.6% below his lifetime percentage*. His line drive rate, while not officially stable yet but pretty close, stands 9.2% less than last year and 5% worse than his stateside career*. These discrepancies tell a clear story of a guy not being able to put good wood on the ball, a classic indication of age overcoming a once great hitter. But then again, this isn’t a surprise for anyone who has been aware of his performance the past two years.

To answer the title’s question: Ichiro’s certainly done as a regular, and truthfully has been finished since 2011 with the exception of one month. The other outfield candidates are simply better: Brett Gardner gets on base more frequently and is an elite defender, there’s reason to be cautiously optimistic about Vernon Wells for the rest of the season, andCurtis Granderson needs no rationalization. ZiPS projects Gardner, Wells, and Granderson to post wOBAs of .318, .336, .349 respectively the rest of the season, while Ichiro is projected to post a lowly .295 mark going forward. Looking at fWAR, the rest of season projections tell the same story, with Ichiro expected to be a full win less valuable than Wells, and 1.5 wins fewer than Gardner and Granderson each. So even if you find his regression in contact and line drive rates to be in a sample too small for your liking, a completely unbiased projection system is sounding the alarm.

The funny thing is that ZiPS hasn’t really changed its projection on Ichiro, as it pegged him to have a .301 wOBA and 0.8 fWAR in the preseason. Despite all this negative data, Ichiro will not strictly be a bench player. There’s still some semblance of value in his legs and glove, and he’ll likely play when Wells DH’s or needs a day off. Moreover, he could carve out a role as a late-game pinch hitter while guys like Jayson Nix remain starters. In terms of on-field production, the Yankees are sure to be in the red, considering his $13M contract, but at this point Joe Girardi cannot afford to regularly play a near automatic out given the other offensive concerns with the lineup. Nonetheless, because of his stature, I fully expect Ichiro to be handed more at-bats than he deserves.

*His career marks do not include his rookie year, as plate discipline and batted ball stats were not yet tracked.

This entry was posted in Analysis and tagged Ichiro, Pinstripe Alley. Bookmark the permalink.

3 Responses to Is Ichiro done?