The Yankees need Robinson Cano more than ever. With a horribly constructed offense, only he and Brett Gardner have posted strong numbers to this point in the regular season. Vernon Wells and Travis Hafner have done nothing since April, the disabled list is loaded, and guys like Jayson Nix already have 200 plate appearances. With all the injuries and retreads composing the club’s personnel, 2013 was supposed to be the year that Cano carried the club. Compared to those expectations, he’s been slightly disappointing. It’s hard to say that considering he’s posted a 124 wRC+, but it’s certainly a far cry from last year (150 wRC+). He’s unequivocally been the team’s best hitter, but the bar was set high from the end of the 2012 regular season. In reality, the expectations were a bit unfair, considering the lack of supporting cast. One guy can’t make up for seven or eight poor hitters composing the rest of the lineup.

A huge issue for Cano has been his struggles against left-handed pitching, something that culminated last season, and I tried to figure out why this has happened. Whatever the reason may be, it’s very mysterious for a guy without any platoon split to suddenly develop one in the past two seasons. His struggles against lefties (74 wRC+) might not be such an issue if Mark Teixeira, Derek Jeter, Kevin Youkilis, and Alex Rodriguez were healthy, but they are certainly magnified when your “most dangerous” healthy righty bats are Vernon Wells, Jayson Nix, and Chris Stewart.

Robbie has always been known to be a free swinger, and this season is no different. He swings at pitches out of the strike zone 5.1% more than league average, and 3.6% more total swings. His walk percentage, 9.1%, is currently a career high, but that’s more of a product of teams pitching around him because he lacks lineup protection. He’s already been intentionally walked nine times; one less than last season and five off of his career high. Definitely can’t blame the opponents for doing so, when he’s most frequently placed in front of Vernon Wells or Travis Hafner. 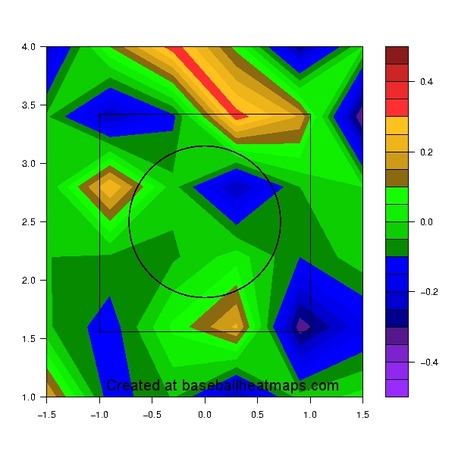 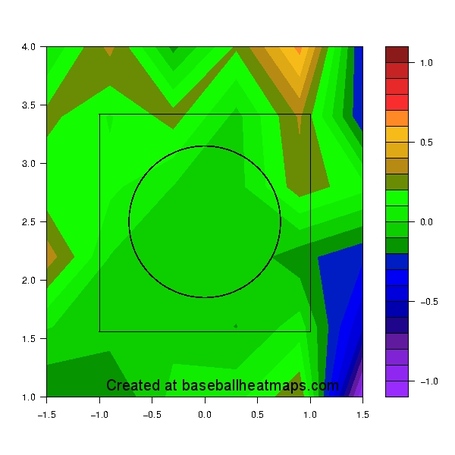 Above, from top to bottom, are plots of the year-over-year change in swing percentage for Cano against righties and lefties based on location. The key on the right indicates the percentage change based on the colors. Compared to last season, Cano is obliging much more often on pitches out of the zone. So, in addition to his continuing difficulties against southpaws, his willingness to chase bad pitches is also contributing to his decline from last season. As mentioned, he’s always been a free swinger, but could the pressure to carry the load also be getting to him? It’s plausible that it’s a contributing factor.

While Cano has seen virtually all of his offensive rate metrics fall from last year, it’s certainly not for a loss of talent. I do think that his over-aggressiveness is being exposed slightly because he has no lineup protection, but then again, he’s still posting a solid 124 wRC+. It just goes to show that sometimes even the league’s top talents need help. Unfortunately, the Yankees’ offseason didn’t afford Cano any reliable sidekicks, and didn’t provide any contingencies for injury. The Yankees need Cano to carry the club for the time being, but truthfully, the request is unfair in a lineup that leaves him as the lone player capable of causing significant damage.

This entry was posted in Analysis and tagged Robinson Cano. Bookmark the permalink.