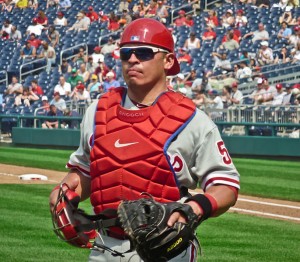 After discussing a different Phillie last week, today Carlos Ruiz is the focus of our trade target series. Catcher has been an offensive black hole for the Yankees ever since the departure of Russell Martin, aside from a solid first month from Francisco Cervelli. Yankees catchers are posting a 69 wRC+, seventh-worst in the majors. The defense has been acceptable; Chris Stewart, who has become the starter since Cervelli hit the disabled list, has a very good reputation with the pitching staff.

Stewart has never been a full-time catcher at the major league level, while Cervelli only received significant playing time in 2010 when Jorge Posada was banged up. Cervelli did hit well in 61 plate appearances before getting hurt this year (141 wRC+), but a lot of hitters can do that over a small sample. The Yankees may have punted the position from an offensive standpoint in the offseason, considering the defensive skills of the two catchers, but the offense as a whole is so poor that it would be foolish to pass on an opportunity to upgrade.

The good news is that with Carlos Ruiz, the Yankees can still have a solid defensive backstop while adding a good bat to the position. “Chooch” is off to a slow start after serving a 25-game suspension for amphetamines, hitting .257/.291/.284 in 79 plate appearances. He also missed an additional 27 games with a hamstring injury. Yet, since 2010, the 34-year-old catcher has posted a 124 wRC+, only behind Buster Posey, Joe Mauer, and Carlos Santana for full-time catchers. ZiPS projects him to post a 106 wRC+ the rest of the way.

Defensively, Ruiz is no slouch. Matt Klassen of the Score ranked Ruiz as the sixth-best defensive catcher in baseball at the end of last season, based on advanced pitch-blocking and caught stealing metrics. Ruiz isn’t as adept with pitch framing as Stewart, but the bat is a greater need.

Bringing in a new catcher midseason isn’t very common considering the importance of having a rapport with the pitching staff, but I’d anticipate Ruiz having a smooth transition. He’s already worked with big-time veterans in Philly, namely Roy Halladay, Cliff Lee, and Cole Hamels, so I’d imagine Yankees’ vets CC Sabathia, Hiroki Kuroda, and Andy Pettitte wouldn’t have an issue.

What about the amphetamine suspension? If he jumped out of the gate hitting well like he has since 2010, any worries about his continued productivity might be gone. However, I have my doubts about him taking the drugs for the past three seasons undetected until last year. It doesn’t do much good to speculate, but if he only did it last season, what explains his strong performances in 2010 and 2011? Yes, he’s aged a few years since then, but I’d like to believe that there is something still in the tank for Ruiz. It won’t take much for him to be an upgrade over the current situation.

Ruiz is on the books for $5M this season, and is owed no more than $2.5M the rest of the way (suspension may decrease this amount). He’s a free agent at the end of the year, so no money to worry about for the austerity budget. Considering the PED baggage, age, poor early performance, and the fact that he’d be a three-month rental, Ruiz value is at a low currently. Like I wondered in last week’s trade target article about Michael Young, are the Phillies ready to sell? They are four games below .500 and eight games out of a playoff spot (division and wild card), so the club’s playoff hopes are close to out of reach. It would be nice to have Ruiz now, but given the Phils’ proximity to .500, I don’t expect them to blow it up just yet. When they’re ready to, Ruiz is sure to be at the top of the Yankees’ board of external targets.

This entry was posted in Speculation, Trade Talk and tagged Carlos Ruiz. Bookmark the permalink.