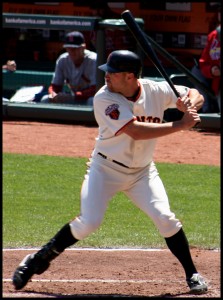 On Friday, it became clear that the Chicago Cubs are ready to sell. Given the Yankees immediate needs, I wouldn’t be surprised if Brian Cashman has already had initial discussions with Theo Epstein and Jed Hoyer regarding a few of the North Siders’ pieces. There are a few players from their roster that would be of use for the Yankees, but the most logical target might be Nate Schierholtz. Not only do the Yankees desperately need outfield help, but they were also linked to the lefty swinging outfielder in the offseason: Schierholtz turned down a contract offer from New York in favor of Chicago.

Schierholtz, 29, is in the midst of a breakout season. He’s hitting .296/.347/.588, good for a 143 wRC+ which would be best on the Yankees. On the surface, this performance seems legitimate considering his BABIP sits at .306, .003 points lower than his career mark.  Leaving San Francisco’s spacious AT&T Park for the more hitter-friendly Wrigley Field may be partially attributable for this boost in performance. Coming to the short porch of Yankee Stadium certainly wouldn’t hurt, either.

While Schierholtz’ numbers look great, he is a one-trick pony offensively. He has a heavy platoon split, mashing righties to a tune of a 154 wRC+ while scuffling vs. southpaws at 46 wRC+ this year. This trend has held very steady since 2011 (133/38 wRC+). Still, his addition would be very helpful given the general awfulness of Ichiro Suzuki and Vernon Wells. Yes, Ichiro has hit well of late, but let’s not fall into the same trap the Yankees fell in off last September. Furthermore, while Zoilo Almonte has been a big positive the past few games, he’s never been highly touted as a prospect, and thus shouldn’t be counted on going forward.

If a trade can be consummated, the likely outfield alignment would be Curtis Granderson, Brett Gardner, and Schierholtz against righties, with Schierholtz swapped out against lefties in favor of Wells. However, I could see the Yankees back away from pursuing Schierholtz in favor of a more balanced outfielder if Mark Teixeira needs surgery. Surgery might mean that David Adams and Lyle Overbay would platoon at first when Alex Rodriguez returns to third base, and having multiple platoons in a lineup can hamstring roster construction.

If the Cubs are serious about making trades now, as they appear to be, they are undoubtedly selling high on Schierholtz. His numbers look great, and may fetch them a grade-B prospect. A guy with a heavy platoon split like that may not quite be worth that price, but I wouldn’t be surprised if the Yankees acquiesce given how well Schierholtz fits into the lineup and the Stadium.

This entry was posted in Speculation, Trade Talk and tagged Nate Schierholtz. Bookmark the permalink.