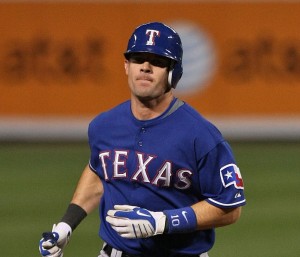 As July inches closer, trade rumors and speculation begin to heat up. No team may need more help, given the injuries and poor offseason, than the Yankees. The organization lacks plausible internal options, and should be active in the trade market. Over the coming weeks, Chris and I will profile some potential trade targets that could be useful to the Yankees going forward.

With Mark Teixeira‘s season hanging by a thread, Kevin Youkilis out for 10-12 weeks, the Yankees are currently turning to a combination of Lyle Overbay, Jayson Nix, and David Adams at the corner infield positions. At first and third, the Yankees have gotten the 6th and 5th worst offensive production respectively per wRC+. There are serious offensive flaws elsewhere (outfield, shortstop, catcher, you name it) that Chris and I will get to during this series, but today’s focus is Phillies’ third baseman Michael Young.

Young, 36, has had a pretty decent year with the bat: .288/.356/.390 (107 wRC+). However, you can see from his .390 slugging percentage that he lacks the traditional power a corner infielder is expected to provide. Nonetheless, he fits the bill of a reputed veteran that the Yankees have gone after in recent years.

Offense should be the focal point of the club’s needs, and although Young isn’t a game changer, he certainly can help. He makes a lot of contact (13.4% K rate), and has a BABIP friendly batted ball profile (high line drive and ground ball rates, low fly ball rate). As noted in the previous paragraph, he’s off to a good start, and ZiPS foresees a .281/.329/.399 slash the rest of the way. Certainly not earth shattering, but a definite upgrade over the current internal options.

If Young can be brought on board, I would envision him playing everyday while David Adams and Lyle Overbay platoon. Against lefties, Young and Adams could be interchangeable at first and third (Young has experience at first), while Overbay could strictly play against righties. Then, when Alex Rodriguez returns (barring a suspension), Young could be in a strict platoon with Overbay at first base (aside from DH and off-days for A-Rod).

What would Young cost the Yankees? Probably not much, especially if the Yankees eat whatever’s remaining of the $6M the Phillies owe him in 2013 (Texas is paying $10M). Young’s contract expires this season, so I imagine the Yankees wouldn’t have any problem taking on any money since it would be for this year only. The player or two in return likely wouldn’t be anything more than a low-level fringy to decent prospect.

A question is: are the Phillies willing to act now? They are in a stage of limbo this season, at 34-37. They’re not quite out of the race (7 GB division, 7.5 GB wild card), but odds of them making the playoffs are a mere 0.9%. Numbers aside, the Braves and Nationals are more talented. Despite overwhelming odds against the Phils, I don’t expect Ruben Amaro Jr. to go into sell mode just yet given his club hovering around .500. The Yankees, on the other hand, must act sooner rather than later, and may not be able to wait until the deadline for an upgrade.

This entry was posted in Speculation, Trade Talk and tagged Michael Young. Bookmark the permalink.