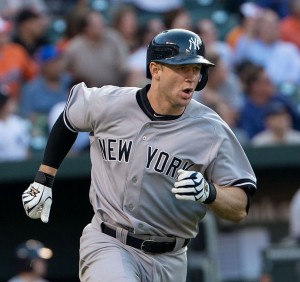 After getting off to a promising start, David Adams has failed to capitalize on an opportunity that hasn’t been around for Yankees’ infield prospects (not that they’ve had many): a chance for everyday plate appearances. After raking in 113 plate appearances in Triple-A Scranton (148 wRC+), backed by a 133 wRC+ the year before in Double-A Trenton, Adams made his debut on the ides of May.

From his debut to May 27th, Adams hit .289/.289/.489 in 45 plate appearances. Albeit a small sample size, but the solid batting average led to some enthusiasm regarding the 26 year-old infielder. However, there were some trends that pointed to regression that may have been overlooked considering the regard for his hit tool in the minor leagues. There has been a major correction, much due to the league learning of and capitalizing on Adams’ weaknesses. Since then, in 53 plate appearances, he’s been a disaster: .080/.132/.080. Again, a small sample, but the Yankees can’t exactly be patient with the offense’s current lack of run production.

The biggest red flag was that Adams hadn’t walked in those first 45 plate appearances. Perhaps this flaw was eschewed because his minor league walk rates hovered between 10 and 11 percent, and the thought was that walks would come. Rather, he’s generally had a more aggressive approach, and it took until June 22nd for Adams to draw his first base on balls.

It appears opposing pitchers began to take advantage of his over-aggressiveness. Adams has begun chasing more pitches out of the zone – first, the four-seamer, which he’s whiffed on 11.9% of the time since May 27th, compared to 6.8% of the time up to that date. The high fastball has been Adams’ vice:

Adams has also been given a heavier dose of offspeed pitches (sliders, changeups, and curveballs). Up until May 27th, he saw these selections 38.2% of the time. Since then, the figure has increased 6%. Additionally, swings and misses on those pitch types have jumped nearly 5%. It appears that the opponents learned of Adams’ struggles on high cheese, while also finding that he has a hard time putting the bat on ball against offspeed pitches.

Based on how many grounders he’s hitting, you would think that he’s getting pounded down in the zone. However, from the graphic above, it looks like there’s a slightly higher concentration of pitches in the upper half of the zone. While really just a guess, this makes me believe there may be some sort of mechanical issue causing him to roll over his top wrist too soon.

With Alex Rodriguez‘ return looming (barring any setback or suspension), Adams is running out of time to prove he deserves to stay. He does have a chance to platoon with Lyle Overbay at first base (when A-Rod returns), provided no upgrade is made. But given both Overbay’s and Adams’ difficulties at the plate, an upgrade at the position seems to be more probable. A-Rod is going to need days off and time as a designated hitter, but unless Adams gets going, Jayson Nix will likely get to spell Rodriguez.

Adams flashed his hit tool initially at the big league level, and has performed well when healthy in the minors. There is still potential for him to be a contributor as a role player, but perhaps this May was too soon. With only 113 career plate appearances at Triple-A (all this year), Adams may need more seasoning despite already being 26. He still has three to four more weeks to show his merit, but I don’t expect the Yankees to move forward with him the rest of the season.

This entry was posted in Analysis and tagged David Adams. Bookmark the permalink.