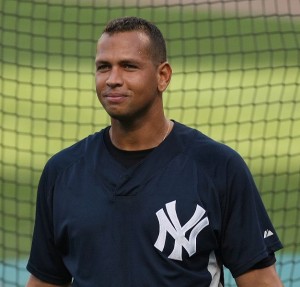 Unless you’ve been living under a rock, you’re probably aware that the much beleaguered Alex Rodriguez is finishing up his rehab and is scheduled return to the big league club next week. Despite not yet playing a major league game this year, A-Rod has been one of the most talked about players in baseball of late thanks to his ties to biogenesis. There seems to be a decent chance that A-Rod’s alleged PED usage will earn him a suspension, which he would assuredly appeal, meaning he will almost certainly spend some time hitting in the heart of the Yankees’ lineup in the coming months.

Even when setting aside the PED mess, it’s hard to say with any certainty how Rodriguez will perform upon his return. For one thing, he’ll be 38 years old next week, making him one of the oldest hitters in baseball. He also hasn’t played a game in eight months and is coming off major hip surgery which could significantly hinder his power and flexibility.

In spite of his many shortcomings, Rodriguez could ultimately provide a much-needed boon to an enfeebled Yankees’ lineup. At 38, A-Rod has reached an age that most players don’t stick around long enough to see, but A-Rod is definitely not “most players.” He’s put together arguably the most prodigious career in baseball history, and was still a capable third baseman as recently as last year, posting a 2 fWAR season despite missing 40 games. And while his surgery raises questions about his future, it could also answer a few questions about his past.  A-Rod has missed quite a few games in recent years, but we can’t know for sure how much his injuries have hindered his on-field play. His hip clearly affected his performance towards the end of last year and a broken hand was another hurdle he was forced to overcome. Prior to that, he had hip surgery heading into the 2009 season and dealt with a mélange of leg injuries in 2010 and 2011. Despite all of his maladies, Rodriguez still managed to be a consistently above-average hitter through his mid-30’s and may have remained something close to elite if he were able to stay healthy.

Although this is his 20th season in the majors, question marks surrounding his age, health, and supposed PED usage make A-Rod an unknown commodity. Frankly, there’s a legitimate chance that he never bounces back from this injury and ends up toiling at or below replacement-level for as long as the Yankees continue to trot him out there. At the same time, he could still be an asset, and could even reemerge as one of the league’s better third basemen. In any event, the Yankees need to see what’s left in the tank, especially when the preeminent alternative is Luis Cruz and his .150/.194/.188 batting line.

There’s no doubt that Alex Rodriguez’s performance has been on the decline, but its hard to know how much of it should be attributed to injury and how much to general aging. It’s far from guaranteed that A-Rod will be able to stay healthy this year; but if he does, it’s not unfeasible to think that we may see something resembling the A-Rod of old.

Chris works in economic development by day, but spends most of his nights thinking about baseball. He writes for Pinstripe Pundits, and is an occasional user of the twitter machine: @_chris_mitchell
View all posts by Chris →
This entry was posted in Analysis, Injuries, PEDs and tagged Alex Rodriguez. Bookmark the permalink.