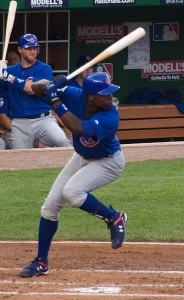 Whether or not acquiring Alfonso Soriano is too little too late, the Yankees made the move without sacrificing anything of significant value. As we well know by now, the Yankees offense desperately could use some help, band-aid or not. Hence the move for Soriano. As rumors of the deal swirled, the return package had been unknown. Today, the New York Post’s Joel Sherman confirmed that Corey Black, the Yankees’ fourth round pick last year, will be heading to the Cubs in exchange for Sori. In all likelihood, many Yankees fans are just hearing of Black’s name today. So what kind of prospect is he?

Coming into this season, Baseball America pegged Black as the Yankees’ 25th-best prospect, mainly citing his power arm that has touched 100 MPH before. He faired well, splitting time in three leagues after being drafted; rookie ball, the New York Penn League, and the South Atlantic League, posting a 3.08 ERA in 52.2 innings.

This year, Black began the season with High-A Tampa of the Florida State League, and has been very good in 19 starts. While his 4.25 ERA is mediocre, a couple of his peripherals have shined. He’s striking out 9.58 batters per nine innings, while only surrendering 0.22 home runs per nine, which is the main reason for his 3.27 FIP. The walks have been the key issue for Black, allowing 45 in 82.2 frames.

The strikeouts and FIP are impressive for the 21-year-old, but we have to be careful “scouting” the stat line. At 5-11, the odds are already against Black remaining as a starter. There simply aren’t many starting pitchers at that size who can hold up for a full workload. Plus, at that height, it’s difficult to get a good downward plane on the fastball, which could cause him to be susceptible to the long ball down the road (this is more concerning as a starter). While his fastball velocity is special, his secondary stuff leaves a lot to be desired. He throws an “average changeup” and a “fringy early-count curveball”, as described within Baseball America’s top 30 Yankees’ prospects. All this really means is that if Black reaches the majors, he’ll likely do it as a reliever riding his power fastball.

All in all, Black is a nice prospect, but certainly not a devastating loss to the system. An arm like his is impressive, so it’s understandable why any team would be intrigued by him. With Chicago eating so much of Soriano’s salary, the Yankees had to give up something decent, but nothing otherworldly. And that’s exactly what Black is: a decent starter prospect, but more likely to wind up as a very good relief prospect.