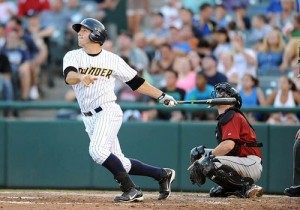 This past week, we were able to talk with Rob Segedin, the Yankees’ third round pick in 2010 amateur draft. Segedin, 24, can play third base and the outfield, but has been on the rise the past two seasons because of his bat. Last season, he excelled in the Florida State League for Hi-A Tampa, batting .297/.362/.488 (129 wRC+), earning him a promotion to Double-A Trenton in the middle of the season. Following the bump up to the Thunder, he scuffled at the plate. However, this year, he was thriving with a second chance at Trenton, hitting .338/.390/.606 (165 wRC+) in 82 plate appearances before succumbing to a hip injury. A local product from Old Tappan, NJ, Segedin remains a prospect to follow going forward.

Some of the more interesting notes from the interview include his health, nutritional changes, hitting mechanics, and which prospect/teammate has impressed Rob the most within the organization. Here’s the transcript of our conversation with him:

From what we understand, you grew up a Yankees fan. Being drafted by the club must have been an incredible feeling – but what was it like to get an invite to spring training with the major league club this year?

Segedin: I was extremely honored to get invited to Major League Spring Training. It is an incredible learning experience for me to see how established big leaguers go about their business in a professional manner on a daily basis. Every day you get to be with the big league club is a tremendous opportunity to learn and get better as a player.

When you reached Double-A Trenton last year, it looks like you struggled based on the stats. However, this year, you were raking with the Thunder before you hit the DL. Is there anything you can credit to the improvement?

Segedin: Yes, definitely. I think the main difference was in my diet. The daily grind of playing professional baseball can wear you down as a player. I learned last year that a big part of being able to play at an elite level on a daily basis is to be in the best shape possible. When you are fueling your body with the right foods, your body can operate at the elite level on a more consistent basis. Once the season ended last year, my wife and I did a lot of research in nutrition and basically developed our own diet to make sure I was fueling my body with everything I need to maintain my strength and energy throughout the season. Since, then I have taken my diet really seriously to the point where I have kind of become the team nutritionist. Also, from a hitting standpoint, I got rid of a leg kick that I worked with all last year. It helped me pick up the ball better and be in a good hitting position more consistently.

How much tougher is the competition at each minor league stop? 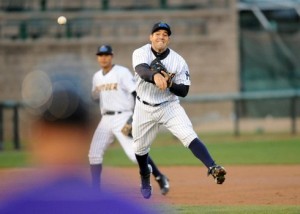 Segedin: At every level the competition is significantly better than the previous level. There is an adjustment period where, as a player, you need to learn all the different aspects that have improved. The goal as a player, is to shorten the adjustment period as much as possible so that you can find success quickly. You need to understand the game more, get an idea on how pitchers will generally pitch you, etc. There is a reason why there are so many levels in the minors until you make it to the big leagues. It’s like going to school, you can’t graduate from medical school if you failed out of high school.

You have been splitting time between third base and the outfield over the last couple of years. What position are you most comfortable playing?

Segedin: I am naturally a third baseman so I am more comfortable at third. However, I have played a significant amount of games in the outfield as well to the point where I am comfortable at all corners of the infield and outfield.

Not sure if this is entirely accurate, but we’ve read that you had the same hip surgery as Alex Rodriguez. If you’re rehabbing at the Tampa facilities and have been around him, have you been able to discuss the injury with A-Rod?

Segedin: I’m not comfortable commenting on Alex injury or rehab process because I do not know much about it. But yes we did see the same surgeon. My diagnosis is FAI (Femoral Acetabular Impingement). Most days I do not see him because I do my rehab at the complex early in the morning with the minor league players, while Alex is doing his rehab during the big league rehab time. I have been around him while we are in the training room a few times. I haven’t been on the field with him or seen him do baseball activities.

How is your rehabilitation process going, and what are some of the challenges of rehab? Is there a timetable in place for you to resume baseball activities?

Segedin: The rehab is going fantastic. As I am progressing every day in rehab it gets more and more exciting to see my body respond. I do not know what the time table is for baseball activities. I will continue to work hard everyday to get myself back on the field as soon as possible. I am very pleased with Dr. Kelly, the Yankees physical therapist, and the Yankees training staff.

Have you kept in touch with any of your teammates since going on the DL?

I keep touch with a lot of the players in the organization, not just the Trenton team. Over the years, you develop a ton of friendships that keep you in contact with guys whether they are in New York, Scranton, Trenton, Tampa, Charleston, etc. There have been a bunch players that I have been playing with my entire professional career that I am very close with. I still watch all the Thunder games and RailRiders on the MiLB app when they are available. Even though I am not around, I like to support and cheer on my friends.

Who are some of the most talented teammates you’ve played with?

Segedin: You know there a so many talented players that I played with throughout the years. For me, I am most impressed by J.R. Murphy. Up until I got hurt, I played with JR every year in professional baseball. I have seen how hard he works on the game and his commitment to getting better at all aspects. His hard work pays off. He is a complete player. He is hands down the best catcher I have ever played with defensively. He is a leader on the field, can control the pitcher, and is as even-keeled as they come. He also has a great swing and the ability to hit for both power and average.

I (Derek) graduated a year after you at NVOT (Northern Valley Regional High School at Old Tappan). Do you still keep in touch with any of the coaches at home, particularly coach Byron? If so, does he offer any advice about climbing the minor league ladder (I know he was in the Yankees’ system in the 80s)?

Segedin: When I first signed and was playing in Staten Island, Coach Byron came to a few games. I really haven’t been home in Old Tappan since I signed. I live in Florida now so I can work out and be on the field all offseason.

We greatly appreciate Rob taking some time out of his schedule to speak with us, and wish him the best of luck with his rehab!

This entry was posted in Interviews and tagged Rob Segedin. Bookmark the permalink.