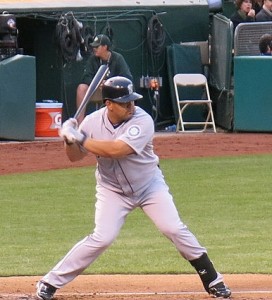 The pixie dust wore off Lyle Overbay and Travis Hafner a long time ago. May was Overbay’s only above average offensive full month, per wRC+ (107), while Pronk has disappeared since the calendar turned to May (.178/.265/.308 in 189 PAs). The lack of production from the duo leaves Robinson Cano as the only lefty-bat in the lineup capable of doing major damage. One guy who might be available, that can replace Overbay or Hafner, is Seattle’s switch-hitting Kendrys Morales.

A big plus is Morales’ ability to switch hit, something the Yankees miss from the injured Mark Teixeira and departed Nick Swisher. For his career, Morales is perfectly average against righties (100 wRC+), while loading up against southpaws (125 wRC+). While the career mark vs. righties seems disappointing, he’s boosted that mark since last season, posting a 117 wRC+ over nearly 700 PAs.

Defensively, I was surprised to see that Morales has graded out well at first base according to UZR and DRS. Nonetheless, he’s still primarily a DH, especially after breaking his ankle in 2010. He’s played over 200 innings in the field this season, so at least he can handle the task here and there (unlike Hafner).

Brian Cashman and Mariners’ GM Jack Zduriencik have consummated a few trades in recent years (Michael Pineda, Ichiro Suzuki, Shawn Kelley), so the two sides seem like a logical match for a deal. Morales is owed less than half of his $5.25M salary, so the Yankees could easily take on any additional salary. And, for a short-term rental, Morales shouldn’t be overly expensive. He makes a lot of sense for the Yankees (as do most hitters with a pulse), as a switch-hitter and a clear upgrade over Overbay/Hafner.