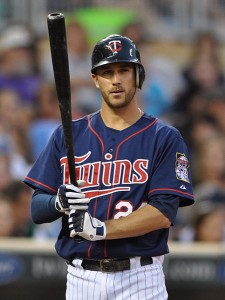 With Alex Rodriguez set to miss further time due to a grade one quad strain, the Yankees’ light at the end of the tunnel for the hot corner has dimmed. Truthfully, they should have been more pragmatic about the situation beforehand. A-Rod is soon-to-be 38, coming off serious hip surgery, and hasn’t been able to remain healthy in years. That’s why I suggested Michael Young as a trade candidate a couple weeks ago. Another plausible option might be the Twins’ righty-swinging Trevor Plouffe. His availability is purely speculation, as there have been no rumors circulating about him. Nonetheless, he’s a logical target for Brian Cashman to investigate.

Plouffe has a few things going for him: age, service time, versatility, and some power. The 27-year-old won’t be arbitration eligible until after next season, and can’t hit free agency until the 2017 offseason. That means he’ll be under control for four more years at a reasonable fare. Plouffe has strictly played third base in 2013, but he has experience at shortstop, second base, first base, and the outfield. He’s by no means a good defender per UZR and DRS, but he’s an option just about anywhere on the field. His bat is what keeps him in the lineup: he’s posted a 106 wRC+ while hitting 34 home runs in 739 plate appearances dating back to last season. His power is a little down this year (.044 ISO drop), but a .176 ISO and 10 home runs at this point would be more than welcome in the Yankees’ lineup.

With that said, why would the Twins move him? A cost-controlled, versatile, and decent bat is of use for a small market club like Minnesota. However, the Twins’ have baseball’s best third base prospect, Miguel Sano, who will be likely displace Plouffe in the next year or two. I would argue that Plouffe’s value may be at its highest now considering his service time, something the Twins could capitalize on.

From the Yankees’ perspective, Plouffe makes sense in a couple of ways. Obviously, the Yankees’ desperately lineup help. While many positions have been an offensive wasteland, Yankees’ third baseman have a 56 wRC+ and .074 ISO, which would make Plouffe a monumental upgrade. To add insult to injury, there have only been three home runs hit by Yankees’ right-handed hitters since May 21st. Should Rodriguez’ quad injury prove to not be overly serious, Plouffe can move to the outfield upon A-Rod’s return.

Financially, Plouffe would slide in nicely to the $189M budget for next season. He won’t be paid too much more than the league minimum next season given that it will be his final pre-abitration season, and thus is just the type of player the Yankees should be intrigued by.

Given four more seasons of control, the Yankees may have to twist Minnesota’s arm a bit to move him. Sano isn’t major league ready just yet, so the Twins might prefer to wait until that day comes. However, as I mentioned before, Plouffe’s value diminishes the closer he gets to arbitration, when he’ll be getting a nice raise. Hopefully, that’s a good enough incentive for Minnesota to entertain a trade. I would imagine that he’ll cost the Yankees a decent prospect or two, but I don’t think it would take an exceptional package.

Other than Young, the other prominent third basemen mentioned this rumor season have been Chase Headley and Aramis Ramirez. The Yankees are likely to balk at Headley’s price tag, and Ramirez’ decline and contract are unattractive. While Young would be an offensive upgrade, he doesn’t provide the pop that Plouffe offers. Hopefully, the Yankees have or will make an inquiry on his availability. This team is playing on borrowed time, and it is essential something gets done as soon as possible. With Plouffe, the Yankees can upgrade now, while also obtaining more than just a rental.

UPDATE, 7/28: As commenter rxbrgr notes, Plouffe will actually be eligible for arbitration this winter as a Super-Two player. He’ll certainly get a couple million dollars out of the process, but nothing that should deter the Yankees. It’s going to be a nice raise above the $520,000 the Twins renewed him for this season, but undoubtedly affordable.

This entry was posted in Speculation, Trade Talk and tagged Trevor Plouffe. Bookmark the permalink.