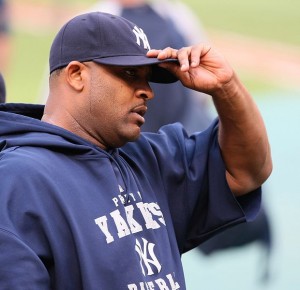 In 2013, CC Sabathia has gone from dominant ace to a very good pitcher. Most noticeably, his fastball velocity has taken a dip which has been the main focus of concern. This isn’t a major surprise, but it’s understandably disappointing. Father time catches up to everyone at some point (except Mo), and a soon-to-be 33 year-old with nearly 2,700 innings under his belt is a prime candidate for regression. While the diminished fastball has been often called the crux of CC’s 2013, the real issue appears to be his soaring home run numbers. His fastball is unequivocally a contributing factor, but it isn’t the only pitch he’s struggling with. In fact, his lesser fastball appears to be hurting his go-to secondary offering: the slider.

In 117 innings pitched, Sabathia has already surrendered 17 home runs. He’s well on his way to setting a career worst in this category, only five shy of the 22 he allowed in 200 frames last year. In five of his 17 starts, CC has allowed multiple home runs. There have only been six starts in which he hasn’t allowed a home run, and three of those were the first three outings of the season.

Since CC joined the Yankees in 2009 through the 2011 season, he allowed 8.1% of fly balls to leave the park (HR/FB%). From that point forward, his HR/FB% spiked to 13.1%. Yet, opponents are hitting 1.7% fewer balls in the air since his HR/FB rate increased. So, despite allowing fewer overall fly balls, they’re traveling over the fence at a higher frequency.

Decreased velocity is certainly one of the culprits, as a mid-90s fastball fastball over the heart of the plate is less likely to get pounded than a high-80s to low-90s one. Carsten Charles has allowed 9 of his 17 home runs on fastballs this season, posting a sky-high 14.1% HR/FB. This is a huge jump from last season’s 6.7% on the offering. CC has never really worked the corners with his fastball (heat map), because he hasn’t necessarily had to. He throws a lot of strikes, but he used to be able to get away with mid-90s heat over the middle. Simply put, he’s going to need to refine his command of the offering to get by with lower velocity.

It isn’t just the fastball that’s getting touched up. His slider has been very susceptible to the long ball since last year. His HR/FB was just under 12% in 2012, and now is up to 14.8% this year. It’s certainly a small sample of just 375 sliders thrown this year, but he’s already one home run shy of his career worst on the pitch selection (5). Previously, CC had hovered between four and five percent HR/FB in 2010 and 2011. He did allow a lot of homers on the pitch in 2009 (14.3% HR/FB), but that appeared to be an anomaly.

His other pitches, the change-up and seldom-used sinker and curveball, haven’t played much of a factor with his home runs issues. Sabathia actually gave up the majority of his home runs (8) on sinkers last season. This year, unless there are some PITCHf/x misclassifications, he’s cut back on frequency of the pitch.

Ultimately, I think Sabathia’s home run issues tie back to his fastball. Obviously, good command is imperative with a slower fastball. And, without his best heat, perhaps his slider is simply less deceptive. While the movement of his slider hasn’t changed, pairing it with a 90-92 MPH fastball makes it a lot less devastating than a mid-90s offering. So, while much of the focus has been on the decreased velocity, perhaps we have ignored this change’s effect on the rest of his arsenal. The power results have certainly changed drastically since his fastball has entered decline.

What’s true with any aging pitcher is the need to make adjustments as decline kicks in. The old pitching axiom is that pitchers must work off their fastballs. It’s certainly a lot easier to work off a power fastball rather than an average or slightly above average fastball. What this means is that it’s going to be essential for CC to improve command of his fastball. As of now, though, it seems that Sabathia’s fastball is bringing down the rest of his game (particularly his slider) with it. If he can show some improvement working the edges with the heater, I think we may see an uptick in performance with his slider and other offerings. CC is still a very good pitcher as is, but he’s going to have to learn how to work with what he’s got. This is just the beginning of his decline, so it is of the utmost importance for him to understand his changing abilities. It’s not an overnight fix, but it has been done before. Just ask Mike Mussina.

This entry was posted in Analysis, Rotation and tagged CC Sabathia. Bookmark the permalink.