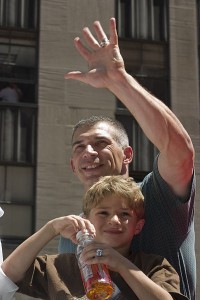 There have been plenty of issues with the 2013 Yankees, on and off the field, but one that has been seldom discussed is Joe Girardi‘s contract situation. His current pact expires at the end of the season, and there’s no basis for the organization to not want him to return. However, there may be a legitimate reason for him to turn down the Yanks, and explore a new opportunity.

Much of the credit a manager receives can be attributed to the players he has, especially a manager of the Yankees. Yet, Girardi still deserves acclaim for his performance, particularly this season. The 2009 season was great, and the two Championship Series appearances were a job well done too. 2013 has been chock-full of adversity, yet Girardi nor the team have crumbled.

Girardi’s been a big part of keeping the club in contention through injuries, PED drama, and a poorly constructed roster. He garners the respect of his players, and will stand up for any of them (especially last weekend). If a team is scuffling under a disliked manager, things can go downhill in a hurry. Look no further than the 2012 Red Sox. This team looked dead only a few weeks ago, but the return of guys like Curtis Granderson and Alex Rodriguez have been a big part of a turnaround. Obviously, a lot of credit can go to a stronger roster, but credit Girardi for keeping the team afloat when things were looking pretty bleak. The odds of a playoff berth are still pretty slim, but I wonder if a different manager would have had this club in the same position.

Of course, managers tend to receive kudos or blame based on the roster’s performance. Filling out the lineup card is relatively important, but most managers generally do just fine in that category. As an American League skipper, the only other real on-field managing is done with the bullpen. This is where Girardi thrives. The Yankees have dealt with overtaxed pens before, most notably during the Joe Torre era. He doesn’t overwork anybody, and keeps his bullets fresh and healthy over the course of the season.

The Yankees will want Girardi back for 2014 and beyond since the Steinbrenners, front office, coaching staff, and players are all comfortable with him. But will Girardi want to come back? The 2014 budget could make it difficult to improve the roster, the farm system has been a disappointment, and the A-Rod drama will drag on. Does Girardi want to deal with all these headaches going forward? I wouldn’t blame him if he doesn’t. He’s been through a lot already this season, but 2014 looks poised to be worse, at least in terms of on-field play. The overreaching ownership doesn’t deserve him back, but hopefully Girardi will be willing to tackle the challenges of the near future.

This entry was posted in Speculation and tagged Joe Girardi. Bookmark the permalink.

One Response to Will Joe Girardi want to return in 2014?