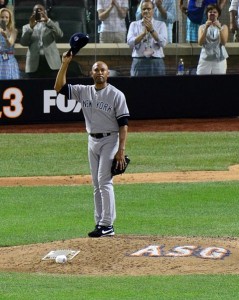 For the last five or six years, the concern of replacing Mariano Rivera has lingered. There was a degree of uncertainty as to when, given Mariano’s age and desire to continue playing. The Yankees’ got a taste of a Rivera-less finish to victories last year, when Rafael Soriano filled the role superbly after Mo’s injury. There was some solace when Rivera announced that he would return in 2013, but this season is different. This time, we know he’s not returning next season. It’s sad to think that we’re down to a little over a month remaining in his storied career, assuming no torrid ascent into a playoff spot.

While there is a strong case for closers being overrated, Rivera has always been head and shoulders above the fraternity of firemen. Sure, guys like Eric Gagne and Francisco Rodriguez had their runs, but they flamed out quickly. Trevor Hoffman was just about the closest to Mo in terms of production and longevity, yet even he seems miles away from Rivera’s ability. What has set Mariano apart from the rest of the pack has been his high leverage, big game performances. Gagne and K-Rod may have had better individual seasons than Rivera, but nobody has gotten it done in the postseason like Mariano has. Yes, part of Rivera’s success is the amount of postseason opportunities he’s had playing for the Yanks, but he’s more than made the most of them.

Rivera’s accomplishments will be nearly impossible to match, given the turnover in the closer role across the league. No Yankee fan will ever feel the level of comfort they used to in the 9th beginning next season. Yet, this doesn’t mean the Yankees are in trouble. They have an excellent in-house replacement: David Robertson.

Years ago, Joba Chamberlain was the heir-apparent to Mo. It’s safe to say that ship has sailed. Guys like J.B. Cox and Mark Melancon were once touted as future back-end guys (Cox flamed out, Melancon has gone on to be succesful). Now, Robertson’s emergence has cast him the future closer. Although Robertson has looked good from essentially day one in the majors, his star wasn’t quite as bright until the last couple of years. Through 2011, there was one legitimate concern about Robertson’s candidacy as future closer. While the strikeouts and ability to strand runners were impressive, his walk rate often led to sweaty appearances. Now, however, he’s honed his control. He dropped his walk rate more than 5% last season, and has held it steady this year. For reference, Rivera’s career walk rate is 5.7%. The past two seasons, Robertson has posted a sturdy 7.5%. That improvement, along with consistently incredible strikeout and strand rates, have made Robertson one of the sport’s elite relievers.

Many might wonder if Robertson has the temperament to be a closer. Sabermetrics tend to discount much of the mental side of the game, and I often lean stat-side in those arguments. Often times, when a player fails in the spotlight, we declare them as mentally incapable of handling a big spot. This is a foolish post-facto assessment. A good example of this common mistake was Alex Rodriguez, who was a “choker” from 2004-2008. That went out the window after his monster 2009 postseason. Back to Robertson: will there be additional fan and media scrutiny in 2014? Absolutely, given the magnitude of the player he is replacing. However, his true talent should trump any string of poor outings. It seems like Mariano always has a bad stretch every season, but he always finds a way persevere. Robertson will too.

Robertson already is one of the best relievers in baseball, and should be one of the top closers next season. Most of my confidence is due to improved control, but I must admit that I also agree with the belief that the difficulty of closing tends to be embellished. Don’t get me wrong, I’m not saying Rivera is overrated. His postseason accomplishments are unprecedented. But as for the regular season closing duties, the only difference we may notice is the man putting out the fire.

This entry was posted in Bullpen and tagged David Robertson, Mariano Rivera. Bookmark the permalink.