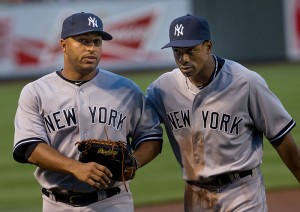 With Brett Gardner, Ichiro Suzuki, Vernon Wells, and Alfonso Soriano all signed through the 2014 season, the Yankees already have a good chunk of next year’s outfield in place. Even if the team lets Curtis Granderson walk, they would still retain four outfielders from their current 25-man roster.

Unfortunately, three of those four aren’t very good. Aside from Mr. Gardner, the Yankees essentially have two part-time corner outfielders in Ichiro and Alfonso Soriano (the past 3 days aside), and an all-around terrible player in Vernon Wells. Wells may be useless on the field, but he does provide a small amount of value to the Yankees’ balance sheet. In terms of getting under the $189M threshold, Wells’ salary will have zero impact. For budgeting purposes, he will be “cheaper” than any other player the Yankees could choose to fill that roster spot. Like it or not, that might be enough to win a spot out of spring training. Ichiro, Wells, and Soriano were all once great players, but are well past their primes at this point. In 2006, they combined for 16 wins above replacement, but would be lucky to eclipse four WAR in 2014.

If Curtis Granderson were to return, the outfield picture would look a whole lot brighter. Even with his injury woes and concerning strikeout trends, he would still be a much better option in a corner spot than the alternatives.  Depending in how he performs from here on out, the Yanks may extend him a qualifying offer. Although, he might not accept if he thinks he could get a better deal on the open market.

If that ends up being the case, the Yankees would probably shy away from paying what it would take to bring him back. The front office is still intent on sneaking under the $189M luxury tax limit for next season, meaning they will need to be prudent in handing out money this winter. There will be more pressing needs in the rotation, behind the plate, and around the infield.

Once Granderson is removed the picture, things get pretty bleak. Beyond Gardner and the aging trio of Soriano, Ichiro, and Wells, the only semi-viable internal option is Zoilo Almonte (my apologies to Melky Mesa). But unless he really turns some heads in spring training, Zoilo will probably start the year in AAA Scranton to get more seasoning, especially coming of of injury.

Other than Zoilo, there’s not much in the immediate minor-league pipeline to help fill the void. Tyler Austin, Slade Heathcott, Mason Williams, and Ramon Flores all have potential, but are at least a year away from seeing major league action. The Yankees will need to explore external options and will need to do it on a budget. This means we’ll probably see another year-long parade of players who were DFA’d by other teams.

Gardner would play everyday in center, and the Yanks would presumably play the match-up game with their assortment of retreads to fill the corner spots. The 2014 outfield will have plenty of name value as Ichiro and Soriano are very popular among fans, but they offer little in terms of on-field performance at this point. Like much of next year’s roster, it’s looking like the 2014 outfield will be a disappointment compared to what we’ve grown to expect from the Yankees.

Chris works in economic development by day, but spends most of his nights thinking about baseball. He writes for Pinstripe Pundits, and is an occasional user of the twitter machine: @_chris_mitchell
View all posts by Chris →
This entry was posted in Analysis, Austerity Budget, Offseason, Roster Management and tagged Alfonso Soriano, Brett Gardner, Curtis Granderson, Ichiro, Vernon Wells, Zoilo Almonte. Bookmark the permalink.

4 Responses to The Yankees’ aging outfield