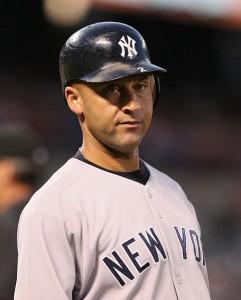 Last season, I wrote about how Derek Jeter was defying his age. In his age-38 season, Jeter’s offensive numbers weren’t far off from his prime years. Still being a shortstop at that stage in his career made his performance even more remarkable, especially in a historical perspective. Much of that had to do with Jeter still being at short in spite of his defense, but nonetheless, to hold up offensively at such a physically demanding position late into one’s career is very impressive. Oh, how things have changed.

A fractured ankle and a couple failed returns this season make 2012 seem like a distant memory. Jeter hasn’t even been an average defensive shortstop for years, and now his ankle woes make his return to the position even more questionable. Yet, Brian Cashman has indicated his only other option is designated hitter. Jeter might be able to handle third base, but the outfield is certainly out of the question at this stage in his career. Ultimately, the window to shift him away from shortstop has likely closed for good.

Knowing that he’ll get the bulk of his time at short or DH, what can we expect next season? He’ll be 40 in June (hard to believe), which is essentially unchartered territory for major-league shortstops. Historically, it’s practically unheard of, and even more so in modern times.

In recent years, only three players have ever had an age-40 or older season at shortstop with at least 50% of their games played at the position and 100 plate appearances: Ozzie Smith, Barry Larkin, and Omar Vizquel. Per rWAR, none of them were anything special. Unlike Jeter, the gloves of Smith and Vizquel kept them at the position. Larkin could still swing the bat. For Jeter, it was his stature that let him remain for the duration of his career. The Captain has a steeper hill to climb than this group, however. He’s trying to return from an injury that probably would have ended most players’ careers at that age.

It’s easy to envision the rigors of the position taking a toll on Jeter’s offensive ability. It’s especially worrisome considering the magnitude of his ankle injury, and the difficulty he encountered in recovery over the past season. Even if he has a clean bill of health entering 2014, keeping his body in in pristine shape will be a chore for Joe Girardi. Not only is the position straining for a 40 year-old, but Jeter is also the type who attempts to masks the nicks and bruises of a long season. Jeter, if healthy, is going to DH more than ever. But when he plays the field, everyone will be holding their collective breaths. These factors will force Brian Cashman to have a complement at the position, whether it’s Brendan Ryan or somebody else. The Yankees can’t afford to go into 2014 with Eduardo Nunez as the insurance policy (-1.5 rWAR in 2013).

It’s no fun to count against the Captain, considering all of his impressive feats in his storied career. Unfortunately, the reality is that the chips are stacked highly against Jeter in 2014. Age is already enough of a bane to any player, let alone a shortstop. That, plus his enigmatic health and growing rust (145 games missed), will make just about anything Jeter contributes in 2014 gravy.

This was originally published on Pinstriped Bible.

This entry was posted in Analysis, Injuries and tagged Derek Jeter, Pinstripe Alley. Bookmark the permalink.

One Response to Derek Jeter: health, rust, and other 40+ year-old shortstops