Five days following the completion of the World Series, Robinson Cano will be eligible to sign with any team he so chooses. With game seven scheduled for Halloween, the Yankees have roughly a month to hammer out a deal with the star second baseman before he hits the open market. Given the circumstances, it seems unlikely that Cano will sign before he gets a chance to test the waters:

That statement, along with his reported 10-year, $300 million request, implies Cano would like to discover his fair market value. It’s undeniably a sound business decision: at this stage, why sign an extension with just a month until open bidding?

The door-in-the-face technique won’t fool anyone. Aside from Mike Trout, nobody deserves that contract length nor price. With that said, what is his true value? Dan Szymborski, creator of ZiPS, wrote a piece about this back in July that still applies (Insider Only).

Eight years seems like a lot for Cano, but the average annual salary seems reasonable ($22.625M). I tend to trust ZiPS, but I find one part of the projection questionable. ZiPS is counting on Robbie posting 11.8 WAR from age 35-38, the second half of the contract. In the last 50 years, the only two second baseman to post an age 35-38 WAR greater than 11.8 were Joe Morgan and Jeff Kent, at 14.1 and 13.1, respectively. Of that group, the median and average WAR are 7.1 and 6.2. If we assume Cano hits the median but still gets eight years and $181 million, he’ll have been overpaid roughly $27 million. Then again, Cano is a special talent on the Cooperstown path, so it wouldn’t be overly shocking if he did put up 11.8 WAR on the back end of the potential deal. I just find ZiPS’ estimation to be a bit bullish.

Although it may be safer to assume fewer WAR than what ZiPS foresees age-35 and on, Szymborski takes into account many more factors than my simple analysis. Either way, there’s reason to be wary of signing a guy late into his career. Based on ZiPS, what might be fair for a shorter deal? 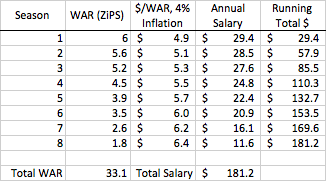 $133M for five or $154M for six are a bit more team friendly. Those two deals provide an average annual salary of $26.6M and $25.7M, respectively, but obviously fall short on the total guaranteed demand that Cano is anticipated to pursue.

Ultimately, I suspect Cano is going to get something not far off from what ZiPS envisions. As long as there are a few bidders, he shouldn’t have an issue getting that seventh or eighth year. When push comes to shove, I’d guess the Yankees will cave into those demands. Things are looking bleak for next year, but losing Cano would effectively make 2014 lost season.