Day one of the offseason is here, as the Red Sox finished off the Cardinals to win their third World Series in ten years. The Yankees have a lot of work to do to catch up to their longtime foes, and much of the rest of the league. Admittedly, things do not look particularly bright for the franchise in the near future considering the transgressions of the past year. Hopefully, the front office can extract as much value as possible out of any new additions this year, regardless of whatever ownership is willing to spend.

Brian Cashman’s first task this offseason will be to decide whether or not to tender a qualifying offer to the club’s free agents. Mike Axisa of River Ave. Blues summed up this issue well, noting that the difficult decisions will really come down to Curtis Granderson and Phil Hughes. Hiroki Kuroda and Robinson Cano are no brainers, because the Yankees would be thrilled to have either back at the one-year, $14.1M going rate for a qualifying offer, while also securing a draft pick as insurance if they decline and sign elsewhere.

While only four are going to receive consideration for a qualifying offer, some of the other team free agents might be brought back. The only guys that are certainly not returning are Mariano Rivera (retirement), Andy Pettitte (retirement), Joba Chamberlain, Travis Hafner, Kevin Youkilis, and Lyle Overbay. Cases can be made for the re-signing of Mark Reynolds, Brendan Ryan, and Boone Logan.

Derek Jeter could be a free agent too, if he declines his $9.5M option, allowing him to collect a $3M buyout. Considering his injury-riddled 2013, it’s doubtful that he would do such a thing. If he were to opt-out, it would be bad news for the Yankees $189M budget goal because of some of the rules outlined in the CBA. William Juliano of the Captain’s Blog had an excellent breakdown of the repercussions of a Jeter opt out last winter. It’s probably a safe bet that Jeter picks up the option, but he does have a choice.

There are plenty of guys the Yankees will have to debate re-signing, but none will be nearly of the importance of Cano. With him, there’s still a chance they compete next season. Without him, the club would conservatively be four to six wins worse, taking into consideration any replacement. Bringing him back isn’t as cut and dry as that, though, with money being a significant issue. I wrote about the right price for the superstar second baseman earlier this month.

The Yankees have seven arbitration eligible players, as discussed last week following Matt Swartz’ arbitration estimates. Brett Gardner, David Robertson, Ivan Nova, and Shawn Kelley are all going to be offered arbitration and thus remain under control next year. The other three; Francisco Cervelli, Chris Stewart, and Jayson Nix, are on shakiy ground. None of them will cost much (Swartz’ projects $1.4M for Nix, $1M for Stewart and Cervelli each), but none of them provide much if any value.

Some prospects will have to be added to the 40-man roster to protect them from the Rule V draft. Essentially, players drafted 2009 or earlier are now eligible, while college players drafted in 2010 are as well. As LoHud’s Chad Jennings notes, international signings are a bit trickier to figure out, but one international import that will definitely be protected is Gary Sanchez. Jennings also points out some of the candidates in play to be protected, with some more likely than others: Slade Heathcott, Shane Greene, Bryan Mitchell, Tommy Kahnle, Danny Burawa, and Chase Whitley).

Now for the more fun stuff: free agency and the trade market. Not too much usually gets done before the Winter Meetings, but it’s always fun to speculate about who might be some of the new faces next season. With the needs clear and numerous, the Yankees are expected to be one of the more active clubs this winter. The most glaring needs are behind the plate, starting pitching, left side of the infield, and outfield. It’s not as pressing, but fortifying the bullpen would be a nice touch as well.

The premiere catching free agent is Brian McCann, but there’s a decent group of backstops in the market, such as A.J. Pierzynski, Jarrod Saltalamacchia, and Carlos Ruiz. Any of these guys would be massive upgrades over what was trotted out in 2013.

The starting pitching crop is full of interesting names past their prime or unhealthy, such as Dan Haren and Josh Johnson. These two in particular may come on the cheap because of recent issues, but have a lot of risk. This is why bringing back Kuroda will be a top priority this offseason. Of course, the X-Factor will be Masahiro Tanaka, the latest Japanese import who dominated the NPB. The posting rules are expected to change soon, but nonethless, the fee won’t count against the luxury tax computations, making Tanaka a more favorable target if the scouting checks out. As is, the rotation consists of a declining CC Sabathia, an improving but still risky Nova, along with a plethora of fringy types like David Phelps, Adam Warren, and Vidal Nuno. Michael Pineda can’t be counted on. Ultimately, that’s not going to cut it, and the Yankees will have to shore up the staff.

Third base and shorstop free agents aren’t very exciting, making the possibility of both Reynolds and Ryan returning plausible. Stephen Drew is the best option in the market at short, but he did turn down the Yankees last winter. Reynolds looks like the smart choice at third, with other options being Michael Young, Placido Polanco, and the ex-Yankee Eric Chavez. One thing is for sure: the Yankees can’t go into next year with Jeter’s only contingency being Eduardo Nunez, while someone like David Adams mans the hot corner (assuming a long-term suspension upheld for Alex Rodriguez.

In the outfield, Carlos Beltran, Shin-Soo Choo, and Jacoby Ellsbury highlight this winter’s crop, with Beltran probably the only of the trio the Yankees will seriously talk to. If Granderson goes, the Yankees will certainly need to complement an outfield consisting of Gardner, Ichiro Suzuki, Vernon Wells, and Alfonso Soriano.

David Robertson will have the difficult task of replacing Rivera next season, moving up a notch from the 8th inning/fireman role. With Kelley, Preston Claiborne, and perhaps Dellin Betances and Cesar Cabral joining D-Rob next year, the underbelly of the pen is worrisome. It’s not the top concern with the other holes around the roster in mind, but bringing in someone like Brian Wilson sure would ease any worries. 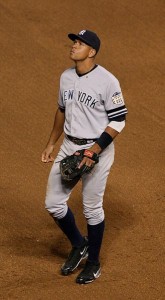 The outcome of A-Rod’s hearing with Major League Baseball and independent arbitrater Fred Horwitz may alter the Yankees’ spending plan, too. A full season suspension will clear the Yankees’ of $27.5M in the computation of payroll for luxury tax purposes, with anything less being prorated for the season. It’s somewhat of a double-edged sword, though, as Rodriguez showed he could still produce in limited action this past season. Obviously, him staying healthy is a huge question mark, but even Cashman conceded that the savings from Rodriguez aren’t certain to be better than production he’d offer on the field.

Unfortunately, with the farm system being so disappointing this past year, the Yankees probably aren’t going to have any minor league graduates make a significant impact in 2014. That would make it a whole lot easier to resolve the multitude of roster issues. What’s worse is that it limits the Yankees’ ability to make any serious plays in the trade market this winter. If guys like Giancarlo Stanton and Chase Headley are moved, the field has a much better chance than the Yanks at making the acquisition. Cashman will explore trade possibilities as always, but any players in return probably won’t be of huge impact. Moves similar to the deal with the Mariners for Kelley last year are more reasonable to expect.

As depicted, there is a lot on the Yankees’ plate this winter. 2013 was a forgettable season, and there are a lot of areas for the Yankees to tweak. Sure, they won 85 games, but much of the uncertainty from this past campaign is going to carryover into next season. Will Mark Teixeira bounce back from wrist surgery? Can Sabathia resemble his old-self? What will the Captain offer? These are just a few concerns that will stick with the club into next season, and that’s not even considering any of the holes free agent departures and retirements will and/or have created. The Yankees will not only need good decision making this winter, but also good fortune in 2014 to return to the playoffs. It will be a tall order to get the Yankees back in October in 2014, but the groundwork can certainly be laid for 2015.

This entry was posted in Offseason, Speculation. Bookmark the permalink.

One Response to Plenty to do for the Yankees’ this winter