From April through mid-August, Hiroki Kuroda was one of the best pitchers in baseball. 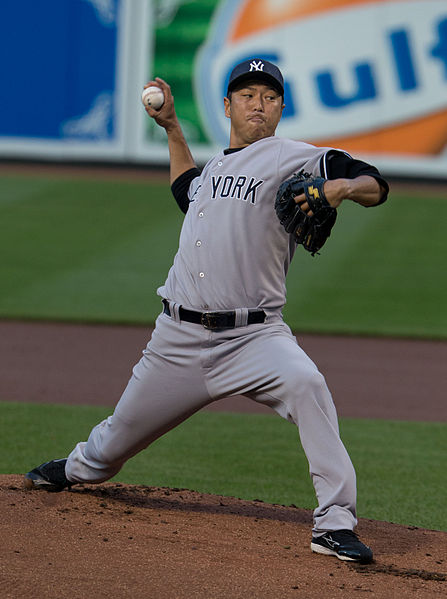 After throwing eight shutout innings against the Angels on August 12th, Kuroda’s ERA was a sparkling 2.33. Things went downhill from there, though. Over his next eight starts, he went 0-7 with a 6.56 ERA before the Yankees decided to shut him down instead of making his final start. Kuroda is a free agent this year and the Yankees have offered him a one year qualifying offer, worth $14.1M, which he will probably decline. If he does end up hitting the open market, the Yankees will have to decide how much they’re willing to pony up retain his services; and how heavily to weigh his last eight starts. So what the heck happened to Kuroda? How did he go from being excellent, maybe even elite, to a complete albatross?

Looking past the differences in ERA, there weren’t many drastic changes between Kuroda’s first 24 starts and his last eight. His strikeout and walk rates remained roughly the same and he continued to induce a good amount of ground balls. What really stands out are his Batting Average on Balls in Play (BABIP) and Homerun/Fly ball Rate (HR/FB%), which are both very luck driven  in small samples.

Russell Carleton of Baseball Prospectus did some awesome research that shows how quickly certain stats become “reliable.” According to his research, rates associated with strikeouts, walks, grounders, and fly balls become reliable very quickly — within just a few starts; but it takes multiple seasons for HR/FB% and BABIP to stabilize.

Based on eight starts, we can say a lot about Kuroda’s ability to strike guys out, avoid walks, and induce grounders; but hardly anything about his ability to control what happens to the ball after that — like where the balls are hit in relation to where fielders are standing.

Still, BABIP and HR/FB% aren’t entirely out of a pitcher’s control. Bad pitches tend to get hit hard, and hard hit balls tend to find holes (or turn into home runs), so maybe Kuroda was just throwing bad pitches? It certainly felt like his stuff was not quite as sharp late in the season, but its hard to say how much of that feeling was because he was allowing so many runs. Plenty of pitchers become fatigued and lose some of the pop on their fastball late in the season, so maybe that’s what happened to Kuroda?

Velocity loss wasn’t the issue. If anything, his velocity actually improved late in the season, according to pitch F/X data — 91.3 MPH vs. 92.1 MPH for his fastball. Although his velocity checks out, it’s possible that he just lost command of his pitches over this period and left too many over the heart of the plate. But if Kuroda was having any sort of chronic command problems, he probably would have issued more walks, which he didn’t.

Chris works in economic development by day, but spends most of his nights thinking about baseball. He writes for Pinstripe Pundits, and is an occasional user of the twitter machine: @_chris_mitchell
View all posts by Chris →
This entry was posted in Analysis and tagged Hiroki Kuroda, Pinstripe Alley. Bookmark the permalink.