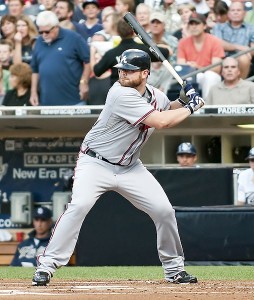 One year after mistakenly letting Russell Martin depart, the Yankees’ front office corrected its gaffe, signing ex-Braves catcher Brian McCann. Yes, a mulligan would be nice on Martin, who received a two-year, $17M contract from Pittsburgh last offseason. However, with that obviously not an option, McCann is a massive upgrade behind the plate despite the price difference. $85M over five years (with a vesting sixth year for an additional $15M) is a steep price to pay to resolve the catching situation, but McCann is a logical fit.

McCann, 30 in February, has been one of the top catchers in baseball since his first full season in 2006. Last season, Yankees’ backstops amassed 0.9 fWAR, 23rd in baseball. Francisco Cervelli got injured, Chris Stewart was exposed, and Austin Romine failed to capitalize in what was likely his final opportunity to take the catching reigns with the Yankees. Considering McCann’s track record and 4.4 WAR Steamer projection*, his addition immediately propels the Yankees’ catching situation from one of the worst in to one of the best in 2014.

It’s no secret the Yankees’ have prioritized good defense behind the plate since Jorge Posada‘s departure, and McCann fits the bill. Pitch-framing has been a hot topic in recent years, and while Stewart proved to be one of the best receivers in the game statistically, McCann is no slouch either. Ben Lindbergh’s analysis of the transaction notes that McCann was 22 runs above average despite catching just 800 innings last season, fifth-best in baseball. He isn’t a great thrower (24% career caught stealing), but as Keith Law opines, his receiving ability is great enough to make his defense as a whole worth a win per year in spite of his arm. Unlike last year’s catching tandem, McCann is a superb hitter to boot – something that has been missed since Posada and Martin left.

With a career 117 wRC+, McCann’s offensive production is elite for a catcher. By comparison, his catching peers have posted an 89 wRC+. In other words, the average catcher hits 11% worse than the league average hitter, and McCann bats 17% better than the league average hitter. Simply put, McCann provides offense at a position that is a less common source for run production. Next season, Steamer foresees a .255/.334/.452 line with 27 home runs in 635 plate appearances. This projection assumes McCann will receive time as a designated hitter, because the pre-trade projection had him at 494 plate appearances.

Another intriguing tidbit is the move to Yankee Stadium from Turner Field. Brad Johnson of Fangraphs writes:

There is also the consideration of home stadium. McCann is a pull hitter and drives most of his home runs out to right field. Per Fangraphs’ own park factors, McCann is moving from a stadium that is league average for left-handed home runs (100 park factor) to one that inflates home runs by 14 percent (114 park factor).

This diagram, from the same article, sums up the difference quite well: So, what’s not to like? McCann aligns with the Yankees’ desires defensively at the position, and is already an elite hitting catcher that is likely to receive a boost as a lefty in Yankee Stadium. There are few concerns: health, the contract length, and salary.

McCann missed the first 30 games of 2013 after recovering from right shoulder surgery. With the deal pending a physical, the Yankees will be assured that McCann is in good shape for the upcoming season. Yet, it’s fair to be worried about a shoulder injury for any hitter, though, and it’s perfectly reasonable to be concerned about a catcher holding up with nearly 9,000 innings at the position in his career. The wear and tear of the position is unlike any other in baseball, leading to a more rapid age-related decline. This might force McCann off the position to first base or designated hitter by year three or four of the deal. With Mark Teixeira‘s contract up after 2016, the Yankees are banking on McCann sticking behind the plate for the next three seasons. That also buys the Yankees’ time to groom Gary Sanchez as the next catcher (or to use him as trade bait), who finished last year in double-A and will be 24 after Teixeira’s contract expires. It might not bode well for prospect J.R. Murphy‘s future as a starter with the club, but catching depth is nice to have.

McCann’s $17M AAV is a big hit to the Yankees’ budget, but certainly doesn’t preclude them from following through with the $189M plan. Factoring in Matt Swartz’ arbitration estimates, there’s still $38M to play with. That figure could increase depending on the outcome of Alex Rodriguez’ arbitration case. Regardless, that’s certainly enough to squeeze Robinson Cano in, although doing so would force them to skimp at other needs.

At $85M or $100M over five or six seasons, McCann will have to amount between 14 and 17 wins above replacement to justify the contract, assuming $6M per win. This assumption is flawed because the marginal value per team win is higher for the Yankees’ considering their placement on the win-curve (i.e. an additional win for a 65 win team is negligent, but much more valuable to a mid-to-high 80s win team), but it serves as a decent starting point.

If we follow from Steamer’s 4.4 win projection in 2014, and assume a 25% yearly decline, McCann will be worth 14 wins above replacement through five seasons. Perhaps Steamer is a bit optimistic (635 plate appearances is a reach, even if he DHs), but WAR models do not currently account for pitch framing, so he is still slightly short-changed by the metric. Furthermore, keeping in mind that each added win is worth more to the Yankees’ than many other clubs, McCann’s production has an excellent chance at matching his salary. It sure looks like the Yankees are going to get what they paid for. One final thing to note: I didn’t consider a sixth year because if it vests, it’s safe to guess that McCann would have outperformed his salary’s expectations.

It’s hard not to like this addition for the Yankees, obtaining the best player available at the position to fix one of the team’s most pressing needs. When spring comes around, it might be the biggest upgrade any team made this winter simply because of how bad Yankees’ catchers were in 2013. There’s a lot more work to do this offseason, but this splurge was a very good start to the winter.