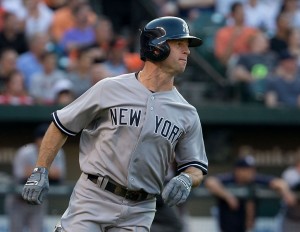 Since the addition of Jacoby Ellsbury, the buzz related to Brett Gardner‘s availability has heated up. It’s all just speculation and rumors, but there seems to be some logic to it. The Yankees now have four starting-caliber outfielders, and players all over the roster that will need time as designated hitter. This doesn’t make Gardner the odd man out, as guys like Carlos Beltran and Alfonso Soriano will DH frequently, but it does make Gardner appear expendable from an outsider’s perspective. Yet, Brian Cashman hasn’t stated his intent to move the speedy outfielder, to no ones surprise. Even if he is looking to make a deal, he’s going to attempt to maintain his poker face in the public eye. For now, his stance is as follows:

“The only way I’m interested in moving Brett Gardner is – it’ll be tough – somehow feeling that we’re putting ourselves in the position to feel better about us in the short- and long-term.”

It certainly makes sense for Cashman to field offers for Gardner. Perhaps there’s a club that gets a little desperate. There’s always a point at which a team will move any player – it just takes the right offer. Still, Gardner has been one of the team’s more valuable assets the past few seasons. It wouldn’t be easy to part ways with him, so let’s examine the pros and cons of him not being around in 2014.

Gardner’s been a solid contributor during his Yankees’ tenure. I mentioned the difficulty of replacing him in a piece about dangling him earlier this offseason, but now that they have a viable option in center, there’s no better time to at least consider moving him. Cashman is taking the right strategy in stating that he’ll only move him if it makes the club better.

I wouldn’t be annoyed if the Yankees kept Gardner, because he could still be deployed effectively in a number of ways in 2014. Because of this, the front office is in the driver’s seat in this situation. If he’s kept, the Yankees would still have a three win player on their hands. If not, it means the Yankees probably acquired a mid-rotation starter and/or infield help. Either fate should produce a positive outcome for the team.

This entry was posted in Offseason, Trade Talk and tagged Brett Gardner. Bookmark the permalink.

One Response to To keep, or not to keep Brett Gardner?