The Yankees have not hesitated to throw serious money at free agents this winter — they’ve already inked Brian McCann and Jacoby Ellsbury to long term deals and will surely be tied to many more names in the coming months. At this point, its looking like they may be throwing the $189M spending plan out the window. They still have at least $20M in AAV to play with this winter (as much as ~$47.5M depending on what becomes of Alex Rodriguez‘s legal mess) but still have plenty of holes on their roster. In any case, the Yankees will have one of the highest payrolls in baseball with at least $60M in AAV going to newly-signed free agents. These new acquisitions are likely to have the most productive seasons of their new contracts in 2014, yet, it’s not at all clear if the 2014 Yankees will be a playoff caliber team if they do in fact decide to adhere to the spending cap.

The Yankees’ roster is not constructed in a very cost-efficient manner, which outweighs their tremendous financial resources.  A big part of the problem is that the team has a lot of money tied up in aging superstars. A-Rod, C.C. Sabathia, Mark Teixeira, Derek Jeter, and Ichiro Suzuki combined for just 0.5 WARP in 2013, but are owed $100M in 2014. When the Yankees signed A-Rod, Teixeira, and Sabathia to long-term contracts back in 2008/2009, they knew the later years wouldn’t be pretty — that’s just the nature of long-term contracts. Maybe they didn’t think it would happen as quickly as it did, but they knew there would come a time when those players wouldn’t be good anymore. A big-market team like the Yankees can generally absorb an albatross contract or two without any problem, but the Yankees’ farm system has chronically failed to produce low-cost players capable of augmenting the pricey veterans. Ivan Nova‘s really the only decent player they’ve promoted in the last five years and there’s not much on the immediate horizon either. Simply put, the Yankees have no core of young players to build around.

At Baseball Prospectus, Jonathan Judge recently attempted to quantify the quality of a team’s core of players in from the 2013 season. He used players’ WAR, age, and years of team control to calculate how many “core wins” each player is worth. The analysis showed that the Yankees had the worst core in baseball in 2013 and were the only team not to have any “core players.” Their last-place ranking isn’t all that surprising. The team’s most productive players from last year — Robinson Cano, Brett Gardner, Alfonso Soriano, Hiroki Kuroda, and Andy Pettitte — were all within two years of free agency; and other than Nova, none of the young-ish players on the roster contributed much of anything.

To see if things looked any better for this season, I ran Jonathan’s method on the current Yankees’ roster using the 2014 Steamer projections available from Fangraphs. Non-catchers have been scaled to 550 PA’s, catchers to 450 PA’s, starting pitchers to 150 IP, and relievers to 60 IP: 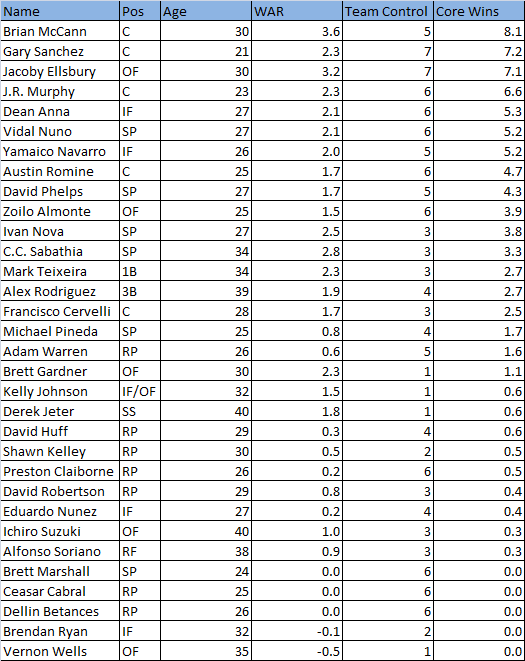 The good news is that Steamer projects the Yankees to have seven core players (players with >5 core wins),  but three of those players have projections that don’t pass the smell test and three happen to be catchers, a position where the Yankees should be set for a while.

The Steamer projections for Dean Anna, Yamaico Navarro, and Vidal Nuno are based almost entirely on minor league stats and should be taken with a huge grain of salt. All three could help the Yankees next year and will be worthy of long looks in camp, but aren’t what anyone would consider to be core players. The fact that these guys are at the top of the list tells us all we need to know about the Yankees’ core of players.

So other than the newly acquired Jacoby Ellsbury, the Yankees’ core is made up almost entirely of catchers. Brian McCann will be a staple in the Yankees lineup for the next few years which clouds the futures of prospects J.R. Murphy and Gary Sanchez — both of whom are projected for at least 2.3 fWAR in 2014. Again, projections for minor league players don’t mean a ton, but Murphy and Sanchez are legit prospects. It’s pretty clear that both have a lot of potential and should be major-league ready before long. With incumbents Francisco Cervelli and Austin Romine also in the mix, the Yankees have a bit of a catching surplus, meaning Brian Cashman will probably end up dealing a catcher in the coming months to fill other holes on the roster.

At this point, the Yankees have very few pieces to build around, but adding McCann and Ellsbury is certainly a good start. There seems to be enough cash in the coffers to keep adding to this new core of players via free agency — a strategy that should keep the Yankees in playoff contention for the next three or four years. Hopefully by then, the farm system will be churning out major-league caliber players again and the Yankees won’t have to rely so heavily on over-priced free agents.

(This was originally written for Pinstripe Alley)

Chris works in economic development by day, but spends most of his nights thinking about baseball. He writes for Pinstripe Pundits, and is an occasional user of the twitter machine: @_chris_mitchell
View all posts by Chris →
This entry was posted in Analysis, Roster Management, Speculation and tagged Pinstripe Alley. Bookmark the permalink.