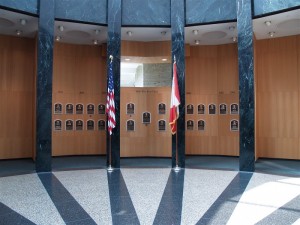 Hall of Fame season is upon us, with the announcement of the 2014 class coming on January 8th. There’s been plenty of debate pertaining to this year’s crowded ballot, so I’ll mix it up. Instead, let’s examine what active players might be enshrined in Cooperstown farther down the road. Yesterday, I examined the American League hopefuls. Today, I’ll take a look at the National League.

Please note that this post is heavily subjective and there was no scientific method as to where I placed particular players. The exercise is intended to be a fun and open discussion about certain players’ merits and likelihood of election.

Locks: None | On the fringes: None | Jury’s out: Paul Goldschmidt

It was pretty hard finding anyone on this roster worth consideration, but Goldy would be the player to bet on if one was forced to choose from this club. He did post a nice 6.4 fWAR this past season along with 36 home runs, but his offensive peak will have to be very impressive to get in as a first baseman. A .302/.401/.551, 36 homer, 156 wRC+ season at age 25 was a nice start.

Locks: None | On the fringes: None | Jury’s out: Andrelton Simmons, Craig Kimbrel

It seems odd for me to mention someone like Simmons as a guy who may garner consideration in the future. Simmons defensive prowess has been remarkable, with scouts and advanced metrics both in agreement. Baseball-Reference credited Simmons with 5.4 defensive wins above replacement, which is the greatest single-season mark of all-time. There are flaws in comparing this metric with players of the past, as these metrics weren’t always available. However, it appears that if Simmons could have an Ozzie Smith-esque career, he’ll have a chance. It’s early and a long shot, but something worth following.

It’s almost impossible to predict what relievers might make the Hall, considering the volatility of the role and the scarce representation of the position at the museum. There’s no question Kimbrel has been pretty awesome in his short career, but he’s going to have to sustain his success for a long time. Some strong postseason performances would help, too.

Locks: None | On the fringes: None | Jury’s out: Joey Votto

Votto, 30, has raked since cameoing in 2007, with a career .314/.419/.541 career triple-slash. He’s accumulated 33 fWAR in his seven seasons (six full), and won an MVP in 2010. Holding him back, however, are the counting stats that really boost a player’s candidacy in voters’ eyes. With just 999 hits and 157 home runs at his age, he’s not going to wind up with gaudy career numbers. There’s no doubting he’s been a great player, but he has a lot to overcome.

Locks: None | On the fringes: None | Jury’s out: Troy Tulowitzki

Tulo has put up some awesome numbers as a shortstop, and has been a slick fielder to boot. However, a few things hold him back. Will he be able to stay healthy? He’s struggled to historically. If injuries push him off the position or shorten his career, his chances of making Cooperstown can probably be forgotten. Additionally, playing in Coors Field could be a detractor. For example, his traditional numbers have been better, per season, than Derek Jeter. However, both share the same career wRC+, which is league and park adjusted.

Locks: None | On the fringes: Clayton Kershaw | Jury’s out: Hanley Ramirez, Yasiel Puig

Kershaw turns 26 in March, and already has 28.4 career fWAR. He’s easily been the best pitcher in baseball the past couple of years, and has an incredible 2.60 career ERA. Furthermore, the only player with a better career ERA- is Pedro Martinez. Kershaw is very close to being a lock – if he can stay healthy, he has a chance at putting up one of the greatest peaks ever.

I was kind of surprised to see Ramirez at 37.1 fWAR already, but the 30 year-old has been a full-time player since 2006. His offensive numbers are awesome – for a shortstop. A position change, which seems very possible, would hinder his chances. His health could be a big issue, too.

Any Puig Cooperstown talk is admittedly a bit rash, but he certainly has superstar qualities. He was one of the most exciting players to watch last season, and I’m looking forward to his first full campaign in 2014. A lot can go wrong for a guy with so much of his time ahead of him, but one can imagine him having a special career.

Locks: None | On the fringes: None | Jury’s out: Giancarlo Stanton, Jose Fernandez

Stanton has the power to be Cooperstown-bound, but needs the body of work as he enters his fifth season in the bigs. He’s only 24, and already has 117 dingers. With his brute strength, he has a shot at posting some impressive career home run numbers. Playing in the expansive Marlins Park is certainly hurting him, but would anyone be surprised if Stanton surpassed 500 career home runs?

Fernandez’ rookie year was pretty special, but it’s premature to seriously consider him as a future Hall of Famer. There’s no doubt his talent has put the league on notice, which could make him a superstar for years to come.

Locks: None | On the fringes: None | Jury’s out: Ryan Braun

With a .312/.374/.564 triple-slash with 211 homers and 32.3 fWAR at age 30, Braun looks like an “On the fringes” candidate on paper. Yet, Braun has tarnished his legacy in the past couple of years with the PED issues, which will probably keep him out of Cooperstown even if he rebounds to post impressive numbers in the latter part of his career.

Locks: David Wright | On the fringes: None | Jury’s out: Matt Harvey

Wright may be the best position player in Mets’ history. The 31 year-old already has 50.2 fWAR, and numerous impressive offensive seasons under his belt. Playing at Citi Field may hold back his counting stats in the long-run, but I believe Wright has all but punched his ticket to Cooperstown.

Obviously, Harvey’s future would have looked a lot more exciting without the Tommy John Surgery. By losing a season of his career to rehab, his best shot at the Hall will be producing an incredible peak. The odds are extremely slim, but I felt like mentioning him after such an awesome 26 starts in 2013.

Locks: Chase Utley | On the fringes: Cliff Lee | Jury’s out: None

Utley has struggled to remain healthy the past few seasons, which I think has made some forget about just how great of a player he is. He’s one of the great hitting second baseman in history, and an excellent defender as well. He posted five consecutive seasons of 7.1 fWAR or greater, including two 8 win seasons. And, even though he’s missed chunks of time over the past three seasons, he’s still managed to be no worse than a three-win player in each. His 55.2 career fWAR for a second baseman is nothing to sneeze at, and with still a few more years to play, he has a good shot at cracking 70. I do worry that the voters may not appreciate him in the same way, but for me, he’s deserving.

What hurts Lee is that he didn’t do all too much before age 29. Now 35, Lee is going to have to defy the aging curve in order to win over the voters. He’s closed the gap pretty quickly, with a Cy Young and 46.5 fWAR, but he still has his work cut out for him.

Locks: None | On the fringes: None | Jury’s out: Andrew McCutchen

In the future, 2013 might be looked at as the year that jolted McCutchen’s Cooperstown run. Again, like the others in the “Jury’s out” category, he still has a lot of work to do. Only 27, with 27.2 fWAR and an MVP award in tow, the Buccos superstar has positioned himself well.

Locks: None | On the fringes: None | Jury’s out: Buster Posey

As mentioned in yesterday’s American League version discussing Joe Mauer, Posey is one of best hitting catchers in the game. He’s still just a baby, but he’s only behind Mike Piazza in career wRC+ for backstops. Posey’s two rings should help him in the eyes of the BBWA, but he’ll have to stick behind the plate long-term in order to have a serious chance.

Locks: None | On the fringes: Yadier Molina | Jury’s out: None

Molina’s defense has always been elite, but he’s only come around as a great all-around player the past three seasons. Not to say he was a complete slouch with the bat, but he hadn’t been much of a threat offensively before 2011. His career 28.9 fWAR is a bit lower than I would have guessed, but his defensive reputation and two World Series rings could give him a nudge.

Locks: None | On the fringes: None | Jury’s out: Stephen Strasburg, Bryce Harper

The stories are similar for Strasburg and Harper. Nobody questions the talent, which is superb for both. The biggest question for Strasburg will be his ability to stay on the field, while for Harper, it depends on him putting up the numbers scouts expect him to.

This entry was posted in Around the League, Speculation. Bookmark the permalink.

3 Responses to What active players are on their way to Cooperstown? (NL Edition)