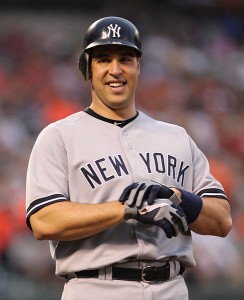 Losing Robinson Cano has placed the onus on the rest of the lineup to make up for his absence. One of those players responsible going forward will be Mark Teixeira. Wrist issues that led to surgery cost him much of 2013, a void that was felt largely because of his replacement in Lyle Overbay. Now, with Teixeira hopefully at full strength, he’s needed to at least be a semblance of his former self. But can he be?

Wrist injuries are serious in nature, but the particular problem Teixeira dealt with has been a bane for a few other hitters in recent years. Jose Bautista, Mark DeRosa, Sam Fuld, Nick Johnson, David Ortiz, and Rickie Weeks have all experienced ECU tendon sheath tears, with Big Papi being the lone player successfully rehab it without surgery. I had theorized that Ortiz avoided surgery based on which wrist it was, but that is still just a guess. So, for those who went under the knife, how did they perform with the bat afterword?

Nobody’s performance really stands out nor tells any story. It’s interesting to look at, and perhaps provides some confidence that one can return from this injury and perform well. However, it shouldn’t be considered predictive for Teixeira. It’s a very small sample, and there are simply too many other things going on with Teix that need to be analyzed. Prior to his wrist injury, evidence points to Teixeira’s body betraying him and already being in offensive decline.

In terms of age related decline, take Bautista for example. He was 31 the year of his surgery, so even without surgery, a slight decline wouldn’t have been surprising. Teixeira turns 34 in April, and it’s clear that the Yankees’ first baseman had already entered the decline phase of his career before surgery. With this in mind, it’s hard to imagine him improving much on his pre-surgery numbers, if at all. For what it’s worth, Steamer projects a 119 wRC+ for Teix, which I would sign up for in a heartbeat. That would be a slight improvement on his 116 mark in 2012.

Keeping the switch-hitting slugger healthy will be vital next season, but unfortunately also uncontrollable. Before the wrist issues, he had already begun to show signs of physical breakdown in prior years, with a hamstring injury in the 2010 postseason and a calf strain in September of 2012. Realistically, it’s hard to imagine Teixeira holding up for a full season. In fact, ZiPS foresees him only getting 356 plate appearances, while Steamer is slightly more optimistic with 488.

Even if the other players’ post-surgery performances had any predictive value, the other issues involving Teixeira are very troublesome. As of now, he’s being counted on to help bridge the gap created from Cano’s departure along with some of the other free agent additions. Just don’t be disappointed if Teixeira’s age and/or body don’t permit him perform at a high level.

This article was originally published for Pinstripe Alley.

This entry was posted in Injuries and tagged Mark Teixeira, Pinstripe Alley. Bookmark the permalink.